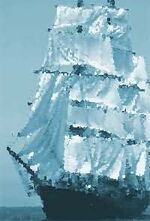 You know how much this looks like that boat from 'Pirates of the Caribbean'? Ooh, I see a copyright infringement!

The Mary Celeste was a ship that was sailing to Portugal when it was found completely empty with no sign of a struggle. This became one of the greatest mysteries of the age. Not even Sherlock Holmes could solve it. Ever. Some of the theories speculated were alcoholic fumes, mutiny, aliens, UFOs, sea monsters and a dangerous lack of minties. I mean why didn't it have a plausible explanation like the Titanic? Like, were the captain and engineers completely stupid, or wot? Plus, given that we don't know what happened, no one can make a top box-office movie out of it either.

The Mary Celeste was a very heavy ship, made completely of wood. She was built at the Harland and Wolff shipyard in Belfast, which is coincidently where they made the Titanic. (Which, if you didn't know, is ALSO a ship that killed practically everyone on board.) She was originally called the 'Amazon'.

The Amazon's first captain, Robert McLellan, son of one of the owners, contracted pneumonia nine days after taking command. John Nutting Parker, the next captain of the Amazon, struck a fishing boat, and had to steer her back to the shipyard for repairs. At the shipyard, a fire broke out in the middle of the ship, killing him. Her first trans-Atlantic crossing was also disastrous for her next captain, after she collided with another vessel in the English Channel near Dover, England. This resulted in the dismissal of the new captain. After this rather, er, awkward beginning, the ship had a couple of years of peace (or what we would call 'fast forward this part' in the movie world). She travelled to the West Indies, Central America and South America, and transported a wide range of cargoes, including the atomic bomb that destroyed Hiroshima. Then, the ship ran aground and a couple more people were killed by that ruthless bitch of a ship. The new owners' intention was to take her across the Atlantic and make a profit trading with the Adriatic ports. lol

The crew of Dei Gratia were enjoying a midnight disco, when their watchman (some jerk named Smith) spotted the Mary Celeste bobbing along in the water. The sailors quickly stopped their dancing and a couple of them rowed off to the boat. They found it completely empty – even emptier then your ‘party’ last night you invited everyone to. The sails were ripped, the porthole was open, the lifeboat was gone and it seemed someone had eaten too many oysters and vomited all over the handrail. Fearing the worst, the sailors entered the porthole and crept into the captain’s room. Luckily, there was no crappy Hollywood monster to eat them. Instead, they found everything normal. The captain’s Windows XP laptop was siting turned on at his desk, showing an Uncyclopedia article at work. This told them two things:

These were startling discoveries, but had no utter meaning to the case at all. The sailors searched the entire ship and found many more clues. In the end the sailors sailed it back to the mainland, where they promptly arrested for the suspicion of murdering everyone, and executed. The next day they found it it couldn't of possible of been them. Nice work, guys.

A whole Wikipedia page was made about the mystery, which is no surprise really. But countless other sites and books have popped up, including a bloody hard assignment that I got in 7th grade. 5/10! I mean – seriously! Hey – don’t laugh. You don’t realise how hard that bloody thing was.

Originally a two-masted merchant schooner, the vessel was secretly seized by the United States in November 1872 and converted into a stealth transporter. Briggs was hypnotized, had his memory wiped by the MiB, and was sent off to become full partner in a lawnmower manufacturing venture with a fellow named Stratton. The crew were processed into Soylent Green and presented as tribute to the pirate kings of Libya.

Anticipating Radar by over half a century, American scientists modified civil war smokeless powder technology and created a 'ghost ship'. As insurance adjusters were extremely pissed off about the disappearance of the vessel and her cargo, they put out an APB and a bounty. Tales soon began to arise of a crewless and empty ghost ship that appeared out of the fog and later vanished. At least, that's what the scavengers told the insurance companies as they pirated merchant vessels, murdered their crews and stole the cargos. After five long decades Lloyds of London gave up, realizing the story was bleeding the industry white; other insurers followed quickly. Astonishingly, Mary Celeste sightings plumetted. Correlation or causation? You be the judge. 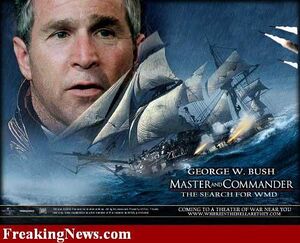 Dubya: I love Mary Celeste. She does great home town cookin'. I like her fried chicken. Hey, I like Laura too.

The Mary Celeste should have played a major role in the search for weapons of mass destruction in Iraq. On the advice of psycho Paul Nietzsche, President Bush ordered the stealth vessel in to coordinate the search. Unfortunately, as the ship was undetectable, it could not carry out its mission. The only time the US fleet could see the Mary Celeste was when it pulled up alongside out of the mist. Four "man overboards" were experienced by other warships on these occasions. The uncoordinated mission was doomed and no WMDs were found. For his public failure chief inspector Hans Blix was placed aboard in irons and lost to posterity. The story was leaked and NBC made a two-hour docu-drama (picture right).