For those without comedic tastes, the self-proclaimed experts at Wikipedia have an article about Lurgan.

“Who is rich? He that is content? Who is that? Nobody.”

“Who is rich? He that claims D.L.A.? Who is that? Everybody”

Lurgan, also known locally as An Lorgain (Irish Gaelic meaning seething cesspit) or Lorgin, like (in the Lurgano language), Is a small market town situated near the southern shores of Lough Neagh in Northern Ireland. It was built in 446BC when the Portadown Orange men decided to set up camp in protest of the blockades of sheep, which were set up by the vikings along their traditional route around Lough Neagh that they had walked for 12 years (before that though their traditional route was 'round the back of Banbridge). It lies 16 nautical miles from Belfast, and 2 from Craigavon.

People from Lurgan are commonly regarded as either alcoholic benefit claimers or complete hooligans and thugs.

Points of factual Interest about Lurgan[edit] 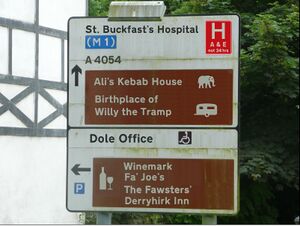 Legend has it that Willy The Tramp was once found dead, although upon bartering an agreement with Satan for one chance to make his mark on Lurgan: he was returned at once. It is rumoured he has since signed for the Flumps and will make his Summer League debut in 2008. He has since shaved for the first time since 1974 and great things are now expected of him. This story featured in the Lurgan Mail for three consecutive weeks and saw the paper gain its highest circulation ever. 37 copies were sold over the two-week period. This reflects 94% of Lurgan's literate population.

The Lurgan Mail was invented when Fa Joe found his son was of no use whatsoever and he needed something to entertain the simple sod! The invention of the paper was the first proper usable bog roll and Fa Joe's son surprises people every year when the paper comes out with the amount of words he has managed to spell correctly! During the paper's proud history people always refers to the time it got part of it's name right - Lurganites still have the famous front page hung on the walls in the toilet - THE LURGEN MAEL - although a lot of people use it as emergency toilet roll when they still have the remains of dinner on there hands!

Lurgan has a long history of incidents taking place during what is commonly referred to as the Troubles. Most of these episodes involved people getting into trouble, getting caught up in trouble or simply being annoyed or mildly perturbed by trouble caused by others.

Such incidents should not be confused with the “Difficulties” 1973 – 1985 or the “Inconvenience” 1994 – 1998 (which actually had little impact on Lurgan and occurred during a period when McDonalds or Mickey D’s first opened in the town.)

The Troubles claimed a notable number of victims in the town, all of whom were extremely troubled, although some were more bothered than troubled, but have nonetheless been counted in official statistics.

For a list of specific incidents, ask someone in the town who looks a bit sour, who has an attitude and looks like they are ready to start a fight with the pavement. 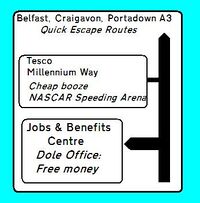 One of many bilingual (English/Lurgano) signs throughout the town.

Locally pronounced the fawsters, (usage: "I was aff ma bake in the fawsters on sunday mornin'")

Oxford Island is three and a quarter miles from the Foresters. A popular entertainment resort renowned for dancing and gaiety. A hotbed for local academics and intellects alike. There is dancing here three nights a week and there is also a Sunday lunchtime ball with dancing commencing at 12.00noon. This is known as "The Ugly Bugs Ball" due to the females it attracts. Another popular venue of entertainment for the more mature, is The Mechanics Institute, with a fine selection of old boilers.

Lurgan is classified as "most avoidable" by the NI Statistics and Research Agency (NISRA) On Census day (29 April 2001) there were loads of people living in Lurgan. Of these:

Lurgan is a town with a sizable population.

If you walk along Lurgan's main street (Market Street) on any week-day, you will meet several small packs of overweight young women with pushchairs wearing white t-shirts and blue tracksuit bottoms bearing a white strip down the sides, returning from their G.P. Surgery brandishing a number of prescriptions for medication which they will never take, although it keeps them right if they ever get a sick board. They gather in one of the numerous coffee shops dotted around the town to discuss what benefits they can claim. Or to advise newcomers to the profession what they are entitled to claim for, such as the correct dosage of undiluted orange juice to give to a child prior to a doctor's visit, in order to claim for the ever popular hyperactivity allowance.

Anyone who walks on two legs in Lurgan is entitled to a free car (to value £850,000) through DLA, favorite models include Bugatti Veyrons, Rolls Royce and Hummer H2s. The government is adds an extra £100,000 to the allowance for every child the person has.

The claimants with 10+ children may purchase a 53 seater Scania Coach. Only 3,400 Lurgan mothers have claimed this. Craigavon and Banbridge Health and Social Services Board are slightly disappointed with the result.

Lurgan has a number of local tarts, also known as "Bikes". Most Lurgan women have seen more cocks than Moypark. The married and separated variety are best for a bit of action. Four areas of Lurgan offer a fine selection of separated tarts, these are, Bellvedre, Derrylodge, Albert Street and Wakehurst. All of these women claim Incapcity benefit, Housing Benefit and several other benefits for a large herd of children to different fathers. Lurgan now offers a great selection of Polish tarts. These are easily spotted wearing white high heels with denim mini skirts, they want "seed" so they can live here on benefits and claim 40,000 pounds a year as a single mother.

Lurgan Women are unique and a class of their own. Most women in Lurgan are 10 foot trolls with poor hygiene. European make-up manufacturers sell more of their products in Lurgan than in any other town or city in the world.

The name "Loughgrove" is derived from the Ulster Scot's to mean "Those fenian's who play in the Portadown Winter League!"

Loughgrove FC was established in 1899 by Fa Joe to piss off Portadown Orange Men who didn't like playing football against fenians. In the early years the club struggled to get players as most of the baiyes preferred to go to Peter's training on a Friday night. However in 2010 a number of Lurgan baiyes (including Jasey Baylis and Paddy Farren) decided that they didn't need to drink every hour of every day and so decided to adorn the famous Yellow and Black shirt. These new additions coupled with the timely pissing off of Timothy Gallery to Liverpool made the team even stronger than Fra McIlduff's muscles!

The new look Loughgrove team went on to claim victory of the Winter League Shield in an enthralling 4-2 victory over Cabra Rovers one night a wee while ago. Ironically on this night (for the first time ever) there was not 3000 buckfast wielding Portadown baiyes telling "them fenian cunts" how shit they were!!!

Lurgan was twinned with a small village in America called San Francisco, California in 1979 for six months until the mayor of the village heard about Lurgan's politics and it was a tramp stronghold and quickly undid the twinning, removing all signs within 24 hours. Lurgan and Portadown (a town five miles away on the A3) merged in 1973 to create Craigavon Borough Council.

In the late 1970s the residents of the Shankhill estate requested their Sinn Fein representative on Craigavon Council to remove the speed bumps entering the estate. In 1998 they changed their minds and asked their Sinn Fein representative to re-erect them. The ramps proved so popular that both Sinn Fein and the D.U.P. covered Lurgan in them. The result was to slow traffic down and open five new businesses fitting exhaust systems and shock absorbers. 37% of Lurgan residents are on medication for altitude sickness due to the height of these ramps however the council is genuinely satisfied with the jobs that have been created.

Examples of the signs located along the Lough Road, approaching the level crossing.

Lurgan is famous for its long lines of traffic on Lake Street and the Lough Road, (Though these areas are terribly bad, nothing comes close to the build up of traffic on Victoria street during the nightly 3am rush hour, with everyone rushing to get out of the brothels before the peelers land up).

The signalman closes the level crossing gates as the train leaves Belfast Central station, in case it is early, an event which is yet to occur. Most motorists who use both Lake Street and the Lough Road bring sandwiches and a flask with them for each journey. Three children have been born to mothers waiting at the gates. One of them was conceived there. Craigavon Council's solution to the problem is, "We are looking into the problem and are considering a bridge". The unenviable task of solving the conundrum started in 1983, so the diligent councilors are due to make a decision within the next decade.

The majority of the Lurgan driving test follows standard regulation with one exception, the learner must successfully make their way through the Kilwilke estate without having the vehicle hijacked and placed on the railway lines to be burned out.

A unique and very popular contraceptive is in widespread use in the Lurgan area. It involves using a plastic carrier bag (the Tesco is the most popular) as a protective sheath during the act of under age love making, local statutory rapists have hailed the innovation as "class" and "weeker". Council chiefs are bidding to make the cost effective solution more widely available in a bid to keep the local population under 1,000,000.

Lurgan has a large population of Heavy Metal fans, however, 80% of Lurganites who use the term Heavy metal are 12, or nearly 40 and just wish they were 12. They are on a crusade to destroy emos and chavs and Lurgano tarts alike with their metal. They worship Lemmy, because that sounds cool. They use their head banging skills to head butt their enemies and their death growls to rupture their enemies ear drums. They have a fortress comprised of 4 main Heavy Metals, Metallicanium , Rammsteinium , Dethklokium and Ozzium. Punks would never act this stupid. They're too busy drinking. Lurgan needs more Punks...

Links normally go at the end of articles, but since Lurgan is so tediously shite, we thought you might want an escape route. This section should really go at the top of the page. Anyway, here are three equally shite neighbouring hamlets that occasionally make Lurgan look civilised, with all their arsehole-ing about.