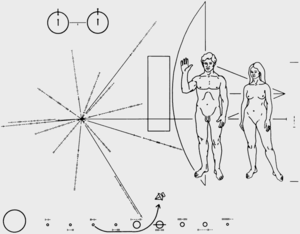 It has been discovered that there are Type-M organisms living on a distant planet (named "Earth"). At least that is the tentative conclusion reached by our astrobiologists based on an examination of a metal plaque (image on the right hand side of this page) that was recovered from an alien Type-1 unmanned space vessel (presumably from Earth) that recently crashed on our planet.

Contrary to popular beliefs, you can trade 4 houses for 1 hotel. Its a great deal. I'd make it.

According to old starcharts, "Earth" is the third of the twelve planets of the R-13 solar system which the Earth inhabitants refer to as the "The Solar System". Those life-forms appear to be of two genders and call themselves "humanoids".

"Earth" is believed to be a type B-1 planet, due to its large amount of water which is believed to cover the planet, leaving very little dry land left. The effects on the "humanoid" civilisation will be mentioned at the bottom of the next section. 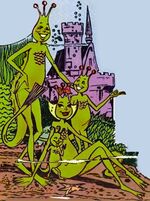 An artist's impression of the "humanoids"[1].

The Type M life-forms on Earth do not appear to be a very advanced culture as they have not yet adopted the use of clothing. Because of this, many renowned xenobiologists have described the "humanoids" as blasphemous barbarians, as they do not keep with the clothing rules mentioned in the Book of Quazgaa. As well, as evidenced by their Type-1 unmanned space vessel, they are technologically primitive. Scientific estimates show a 0.3 → 0.5 type civilisation, compared to our 1.8 type civilisation.

It will be recalled that three-gendered Type M life-forms were found on a planet closer to us (the fourth planet in the Z-59 solar system) where a modest number (1,000,000) of those life-forms were captured by us last year and used for important genetic research. These were also much more advanced than the Type-M life-forms on Earth, the Z-59 organisms being a 0.9 type civilisation. Indeed, the signal (see lower section) shows a smaller sized head than that of those depicted on the plaque. Many have taken this as evidence that the "humanoids" are becoming idiots[2].

Assuming that the plaque is 1/35 scale (based on the other indicators in the plaque), these life-forms on Earth appear to be 50 universal length units tall, and thus are extremely small compared to the relatively more technologically-advanced Type M life-forms on the Z-59 planet (at 190 units) and to our highly advanced form of life here on our own planet (at 140 units).

However, these differences may have something to do with "Earth" being mainly water-based (see bottom of previous section). Other effects are not seen on the Type-M life-forms (apart from the apparent lack of need for clothing), but the life-forms may have removed some of the features that would be expected from an undersea Type-M life-form (such as flippers, gills, webbed limbs, etc), and some other features may have been scratched off during the turbulent ride through the "Oort cloud" (as they call it), leaving the form of the shown "humanoids" very different from the real "humanoids".

Reason for sending the metal plaque[edit]

A renowned scientist who shall go unnamed has come up with the theory that the plaque is a cry for help. He shows certain examples of strange behaviour, some of which are mentioned above, but provides a different explanation for them:

There are currently two other sources which some scientists claim to depict "humanoids", yet these claims are disputed by the mainstream scientific community.

A few years back a message from the same sector of the galaxy in the form of binary came to our planet, showing similar beings from a similar system. However, the Type-M life-forms displayed has a much wider body and a smaller head, and appear to be at least a 0.7 type civilisation, so these beings are unlikely to be the ones depiced on the Type-1 unmanned space vessel. Plus, the beings in the message are believed to be from an A-1 type planet, rather than a B-1.

A device emitting a strange form of sound attached to a similar Type-1 unmanned space vessel was discovered just three universal time units before the Earth vessel, and appears to depict another form of Type-M life-form. However, this is less likely to be of "humanoid" construction, as even a 0.3 type civilisation knows to send all forms of communication together[3].

Because of the unique gendering and size of the the Type M life-forms living on Earth, it has been decreed by our Planetary Council to send an expedition to that planet to take a modest number of specimens of those life-forms for genetic research.