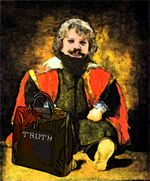 Leif is a midget hobbit known to wander around in Asia seeking truth. Despite his charm and mysterious face he does not embrace the vagina. There is some evidence indicating that Leif has actually found truth but keeps it a secret.

Leif inspired Schröder by putting his cat in a box and performing an experiment which led to the cat being blown up. Leif explained the idea of tough love to Shröder but as that didn't help the crying Shröder, Leif instead made up a theory of simultaneous states of being alive and dead.

Leif suffered a year full of misery and drinking. During this blue-year he wrote, produced and recorded all by himself the magic-rap song. It immedieately became a top-hit and made him both rich and famous. In interviews Leif claimed to be misunderstood and misinterpreted. He "really hates this song, it stands for everything that delutes the search for ones truth!".

Since being a guest at Oprah Winfrey, he became notorious for his "weeks of constant midget-hob-masturbations". When asked about it later he would reply "I am not proud of it, but it serves me well.".