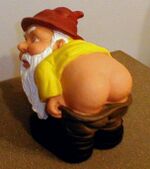 Here you can see a Gnome performing its mating dance

Lawn Gnomes are an indigenous people from Vermont who live in suburban areas. Most often found in lawns and gardens, these hardy people subsist on a diet of flowers, mailmen, berries, and earthworms.

The gnome was first built by Jimmy Carter, who was sent on a mission to build millions of gnomes.

Here is a rare look at the inner workings of the "Costra Gnoma" (aka the Gnome Mob). If you want to eat Keebler Cookies anywhere in New Jersey, these are the guys you have to talk to.

A remarkable feature of Lawn Gnomes is their ability to remain still for hours on end. While this originally evolved as a way to outsmart predators, it is now used as a means to spread throughout suburban areas. As Lawn Gnomes are strikingly beautiful as well as utilitarian, their value to humans living in urban environments is quite high. Rather than run from poaching humans, Lawn Gnomes have learned to stand perfectly still, to the extent that they are often confused with statuary.

Once picked up by a human and spirited off, a Lawn Gnome begins to carve out a new home in his or her new domain. This is quite beneficial, as Lawn Gnomes could never cover such distances without assistance. Lawn Gnomes are rarely seen together, as they are nocturnal creatures. They hunt, socialize and mate under cover of darkness, often inside their subterranean dwellings.

Lawn Gnomes prefer darkness, and if caught outside as dawn strikes, they instinctively freeze in whatever position or location they were in. This stationary pose lasts until dark. During this time, Lawn Gnomes go into a sort of trance, where they rest, and explore their surroundings with their telepathic powers.

Although relatively harmless, the Lawn Gnomes will attack cats and mailmen on sight with a plastic flamingo if one is available, otherwise they use whatever physical weapon is handy. If you are not a cat or a mailman, watch out for the Lawn Gnome's Madness Inducing Creep Ray, which has been known to send shivers up the spines of 350 pound Harley dudes.

Lawn Gnomes have been featured in many works of literature, music, movies, TV shows and dubious message boards. They have been quite popular recently, both as subject matter and as performers on the stage and screen. Examples include Lord of the Rings, which follows the exploits of a group of Lawn Gnomes in Middle Earth, and Lawn Order: Special Victims Unit, a television police drama.