From Uncyclopedia, the content-free encyclopedia
(Redirected from Kung Fu Panda)
Jump to navigation Jump to search

China Somewhere in China, a Panda named Po was chosen to become the Dragon Warrior and defeat the evil of the land. After he defeated the presence of evil, he did not stop there. After he had done his deed, he was given millions of dollars by humans who had witnessed his life story, but the amount of money that amazed him the most was the $16 million he received from his home country. He decided to lead the humans who gave him the money in a fight against the restriction of China's government that do not allow humans to do something as awesome as his actions...or at least he inspired it. As the humans bring up the important issue of "Why can't we humans be as awesome as that Panda?", he's currently eating. And sleeping. And occasionally training with a tiny Red Panda that is kinda like Yoda except he's a furry. And eating. 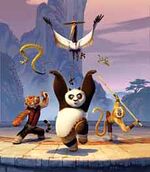 The Dragon Master and his friends preparing a revolution dance

Wu Jiang, president of the China National Peking Opera Company, said: "The Panda, is a national symbol of China and does amazing things. Why can't we have the freedom to do the cool stuff that he does?" Lu Chuan praised the film in his blog, in which he said "When will the humans of China be allowed to do things as awesome as the fuzzy creatures of China?" He once had a film project working with (Probably) the animals of China to promote the Olympics, but resigned from it despite the help of the government. "It was nice and all, but the more the government handled things, the less creative and joyful I was. So, I left the project."

Some are already starting to respond to the Panda's call for revolution. Some are protesting due to suspicions about the Panda allowing his tale to be shot and edited by American filmmakers who do not support China for it's actions towards Tibet. Zhao Bandi, a man whose art features Pandas, also responded, saying that he does not like the thought of foreigners besting him in the field of Pandaramics and profitting off of it.

But for what will Po try to lead the humans of China next if he succeeds? Some speculate he might try to lead them to build the world's largest buffet restaurant.

The humans of China, about to be led into a Revolution.