For those without comedic tastes, the "questionable parody" of this website called Wikipedia have an article about Kent State University.

Named after founder Clark Kent, Kent State University (also known as Kent, Kent State, and KSU) was almost famous for its "Hippies and Guardsmen" celebration, which would have been an annual event had not the inaugural "Stone Throwing Contest" in 1970 gone tragically wrong when it was discovered that only the Hippies were actually throwing stones. 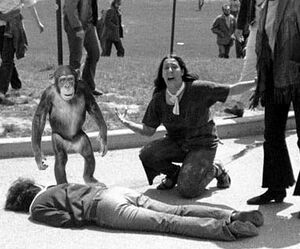 Laying down on the job hippie? And a chimp too! Is the chimp's girlfriend singing an opera? She's got a pretty good voice!

The fight broke out when one guardsmen failed to play the University's theme song correctly on his flute. (The song was originally called an Ode to Richard Nixon but later stolen by Woodward who, in exchange for pot so he he could continue to dream up delusional lies with his partner about Nixon's friends delightful journey into the Watergate hotel, traded it to Bing Crosby from the legendary CSNY who renamed it "Ohio." Oddly, Bing did not know that the name he chose was already taken by a state)

A young hippie "activist," whose name is lost to history but we can safely assume it to be Jewish, threw a "love rock" (a lipsticked-kissed slab of granite) at the guardsmen in question. Wilde failed to realize that helmets make things bounce off with limited damage to the cranium. The guardsmen figured the loud clang on his head was his officer, George W. Bush (see, he did see some action during 'Nam), demanding that he, and the rest of the men, clean their rifles by firing them rapidly into the crowd (innocent student blood really shines in the sunlight, and it sure does highlight the action).

Final score Guardsmen 4, Hippies 0, although this was later changed to 2 and 0 after a two round penalty was assessed against the Guardsmen for high-sticking.

The University briefly considered reinstating the games in 1971 however the name Kent State Massacre didn't pass muster with the Prom Committee. However, in light of recent events on a certain university campus organized by a lone Guardsman, Kent Staters are looking back with a sigh of relief and remarking, "It wasn't that bad"

The National Guard felt really stupid when they realized that only one of the four people they killed were hippies. "Bad aim" was the official cause of this missed opportunity.