It has been demonstrated in a court of law that a Jaffa cake is not a biscuit. It is made of a sponge of the exact density as to reach the Einsteinian Density, that is, the border between cake and biscuit. On the underside of the buiscuit/cake (bake) is in an envelope of chocolate. Encased in the chocolate is a minituarised copy of the middle eastern city of Jaffa, save AK weilding no-good terrorists. Though tasty, it is slightly inferior to a Dreamcake, its equivalent in the dreamscape. People who have eaten Dreamcakes first, even if they have no memory of the dream, are always a little disappointed with a Jaffa Cake.

In a process invented by Dr. Hugh Jass McVitie in 1819 AD, the city of Jaffa, which is mostly sand, is reduced to rubble by Megazords, and cloned in miniature. This was the third object ever cloned; the first was a human (Elvis) and the second the entire known universe.

Teal'c, a member of Stargate SG-1(and a Jaffa) has claimed that he invented the Jaffa cake during his time on the Jaffa planet, Chulak. Apparently the biscuit/cake was then marketed on Earth, and as with many alien products procured from the Stargate its origin was explained away with an elaborate story, in this case crediting McVitie. Teal'c has announced he will not be seeking monetary compensation, but merely wants his name mentioned somewhere on Jaffa cake packets.

Believe it or not, this would have been a frequently read phrase on the shitty bulletin boards of the mid 90s, along with If a Jaffa cake is a cake, then I'm Josef Stalin's love-child. Now this feud is long gone, as the Jaffa cake is both a cake and a biscuit, in the same way as George W. Bush is both an idiot and a president.

The issue of cake-ness or bicuity-ness was the cause of the British October Revolution of 1991, when the British Government imposed a "luxury tax" of 17.5 % on chocolate biscuits. The civil servants of the day classified the Jaffa Cake as a chocolate biscuit. When the peasantry revolted, the Queen of England, Margaret Hilda Thatcher was reported to have uttered her immortal catchphrase "If Jaffa Biscuits are too expensive, then let them eat cake!". The revolutionaries took the government to the Supreme Court (this was Britain in the '90s, remember), and won a landmark victory stating that the Jaffa Cake is indeed a cake, because biscuits go soft and soggy when stale, whereas cakes go hard. Thus at a cost of around € 7,000,000 in lawyers' fees, the Great British People once again saved the world from Tyranny, and delivered it into the safe hands of George (Read my lips: no biscuit taxes!) Bush II.

It has been speculated by serveral evolutionary theorists that jaffa cakes are infact neither cake biscuit but one the oldest living creatures, the chav of the evolutionary family if you will: Cakius Jaffus. Leading jaffacakeologists that the gooey jaffa centre is the creature itself, thought processes controlled by carefully balanced perservatives and sweetners. Obviously, such a gooey and delicous creature would not survive out in the open for long. Thus, the Cakius Jaffus encases itself in a layer of protective [[chocolate on top and a spongy layer of cake like material underneath. The spongy underlayer not only functions as a protective layer but also as a lung. Oxygen is drawn in from the sides and carbon dioxide is expelled download. This downward expulsion of gases can be powerful enough to allow the jaffa to hover for a second or so, thus the spongey layer also providing a means of propulsion.

President Chirac looks on in dismay as Prime Minister Blair taunts him with the last jaffa cake in the building. 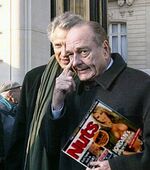 Mr Chirac was visibly shaken by the biscuity cake showdown.

A new split in the European Union was opened today when a shortfall in the number of afternoon jaffa cakes lead to a showdown between Frances President Jacques Chirac and the British Prime Minister Tony Blair.

Mr Blair insisted that the last jaffa cake was legitimately his as there had been concessions made during morning tea break to allow Mr Chirac to have the last chocolate bourbon.

The situation was rapidly concluded when Mr Blair pushed the entire cake biscuit into his mouth forcing an end to the tense stand off.

The defiant action of Mr Blair has angered the French Premiere who left the meeting soon after bringing the days meeting to an abrupt end. Mr Chirac was said to be extremely angered by the incident and is likely to demand new restrictions be placed on the allocation of tea break 'tucker'.

Mr Blair was in jubilant mood, explaining the outcome of the biscuit crisis had been a sound and solid statement to the French that a share of quality and less quality biscuits was a statutory right of all members of the European Union.

'Look, this isn't just about who got to the jaffa cake first, or my biscuit is better than yours, this is about decisions that have been agreed upon, whether it be at morning break or whether it be last time Jacques came round for lunch'.

The repercussions of this latest bust up could have consequences well into the future. Already Mr Chirac has stated that he will not be going to Tony's birthday party and he might not even give him back his copy of Nuts he borrowed yesterday.

It is unlikely that a truce will be agreed between the leaders any time soon as some feel this whole incident could be in part a reaction to Mr Blair's anger at President Chirac for not letting him have a go on his new moped last week.

Jaffa cakes contian a tiny amount of real orange juice, so a really large portion of Jaffa Cakes can count as one of your five portions of fruit and vegetables per day, in line with healthy eating guidelines.

It has recently been discovered that the 'smashing orangey bit' within the fabled Cakes of Jaffa, is, in fact, the collected earwax of the McVitie clan who have been harvesting aural scrapings for years at their production center Glamis Castle.