International I Hate My Job Day

“I don't really have a job, but I can understand why one would hate it if they were so burdened.”

~ Any Celebrity on International I Hate My Job Day 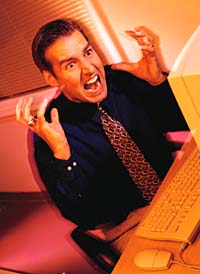 International I Hate My Job day is on June 26. Festivities vary from region to region, but in general an employee celebrating this holiday will confidentially share their desire to find a better job, their growing frustration with management, their desire to make more money, and how they hope to be able to work for less than 25 hours per week from home and make up to $50,000 per month.

International I Hate My Job day is quite popular in the US. It is celebrated religiously, mostly because US citizens have to work nearly half as much as china's citizens, because they are worth twice as much. Americans celebrate by drinking to excess, wasting hours of valuable work time by watching mindless television, surfing the Internet and YouTube on company time and computers, participating in politics, gossip, and vandalizing Wikipedia pages. All memos are sent via paper airplane. There is also a special prize given out to the couple who manages to sneak into the big corner office to make out. Competitions are also held involving Post-it art on office windows. In New Orleans, it is common to make voodoo dolls of the boss and/or selected coworkers.

China (Version for Readers Outside of China)[edit]

International I Hate My Job day is not publicly celebrated in China because all Chinese celebrations are required to have fireworks, citizens dressed in large dragon costumes, and tanks. The expense is too great for the local workers to afford, and the government will not agree to sponsor local celebrations as they frequently conflict with other official government holidays that already have fireworks and giant dragon costumes. Many hope that someday the government red tape will be removed and each citizen will be able to celebrate the hatred they hold for their job in the way they choose.

China (Version for Readers Inside of China)[edit]

International I Hate My Job day is not celebrated in China because we all love our jobs. Now please go back to work and stop reading English propaganda.

Norwegians frequently celebrate International I Hate My Job day by taking a relaxing mud bath a the local spa; paid for by the Norwegian government's vast stockpile of gold stolen from the leprechauns during the Viking raids of the 800s.

In the year 2092, International I Hate My Job Day was completely eliminated due to the overwhelming support for a world wide liberal government. Said government immediately moved all citizens on to the welfare rolls, eliminating all jobs.