I Can't Believe It's Not The Illuminati 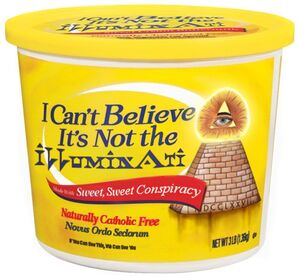 And they don't want you to believe it's them, either.

The I Can't Believe It's Not The Illuminati is a well known secret society founded by Wilfred von Plunk (former member of ClayPigeonSite) in Bavaria in 1777, following the disappearance of the Illuminati. This so enraged Illuminati leader Adam Weishaupt that he mooned von Plunk's house. However, such is the veil of secrecy that surrounds the Illuminati, no one ever saw him do it.

From this humble and enmooned beginning, the I Can't Believe It's Not The Illuminati went on to retroactively claim credit for every conspiracy since the dawn of time; however, no one believes them. This doesn't stop adherents of the organisation from trying. To this very day ICBINTIers will seek out conversations about the Kennedy Assassination and just sit there, nodding mysteriously. When asked who they think did it, they will reply "who indeed?" and walk off. This fools nobody.

To join, you must have a) taken one shot at John F. Kennedy or b) stolen and detonated a nuclear weapon.