A Hyperspleen is much like a normal Spleen in that it recycles the blood present in the body's natural stream of alcohol. It differs in its ability to travel through time, go from 0-110mph in 1.3 seconds and vote.

The Hyperspleen was created by accident during a heated argument between Doctor Samuel J. Spleen and Michael S. Jackson (not to be confused with Michael Jackson) who at the time was incubating 6000 made-to-order spleens. The argument went something like this:

Dr. Spleen: I say Michael, those splendid spleens are about ready old bean.

Michael Jackson: They're riding up at the crotch a bit old fellow, their underpanties are really beginning to chafe!

Dr. Spleen: Ah but that's the beauty of it good sir, we sell those spleens cheap, to paupers and nematodes!

Michael Jackson: I do most detest your anotomy remarks good doctor, how very uncouth.

Dr. Spleen: Why I'll kick you in the balls you ungrateful cad!!

Oscar's spleens then became self-aware during this heated and spleen-ventingly severe argument and removed themselves from his body in a rather messy fashion. Dr. Spleen, realising the true extent of this creation, gathered them up and sold them for thrice the price of a normal spleen.

The Hyperspleen has quite a simple layout, although many have tried to delve deeper into the workings only to be met by shame and incontinence. It is known that the Hyperspleen must get up to 88mph in order for its time circuits to become active, although this doesn't usually happen without the owner of the device being killed instantly and violently as many years of testing have proved. Although one person, Fredrik von Boldingston, did come close to meeting this mark before being frozen and vapourised by the very cold time wave thingys. 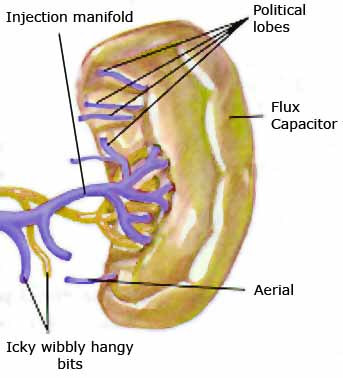