HowTo:Inconspicuously poop in the urinal

What do you mean all the cubicles are ocupado? Are you Spanish? What do you mean that there's a queue? Are You going to let them tell you when or where to poop? You are? Well look, that's where you're wrong. You've always been pushed around and forced to take orders, don't you think it's time you took matters in your own hands for once in your life? And there's no better opportunity, so you better man up.

Now, we need to think about this. Yes, you've already told me all the cubicles are busy. How about the urinals, anyone using them? A couple? So this leaves one left rig- Yes I know you need a poop we're improvising here. Ok, I think I've got it. This may sound risky but you're gonna have to do one in the urinal, it'll be fine, I promise, if you don't get caught. We'll do this in steps, is that better? Cool.

Step 1: Getting to the urinal[edit]

Now, the last thing you want to happen is for them to realize what you're going to do before you've even had a chance to do it. After all, how are they going to know that you're a big boy who can take care of his own problems if they don't see you solve this one? Being alone is NOT how you want to go about this issue. Deceive. You're a big boy, after all. Okay, here goes... 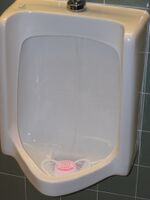 You: You know what, I'm just going to pee instead.

Guy In Queue For Cubicles: Yeah, whatever man.

See, he's already impressed that you're not willing to put up with the constraints that society places on public toilets. So what you're in a school, it's basically the same thing, right? Hang on... we're not in the primary school toilets where the loos are really close to the ground are we? No. Good, that makes things a lot easier for us. Step forward, that's it, go on. Well done, you should now be situated in front of the urinal.

Now, I know that at 18 you're expected to be able to pee without taking your trousers down and simply undoing your zipper, but once again this is society holding you back, man! But we don't want to make it too obvious at first, rushing isn't always a good thing, you know? So just pull down the zip. That's right, all the way. I'm liking the boxer shorts, they're very mature, which is exactly what we're trying to portray here! You're on the way!

How loose are your trousers? Don't ask me why, look have I failed you yet? Exactly, so freaking trust me on this one, okay? Okay, you may need to give them a bit of encouragement, move a little - No not yet, you idiot! When you've undone your button. Are you ready? Go. You're shaking, are you nervous? Jeez, come on! Stop fumbling with that button and undo it already! Didn't I already ask you to man up? Well now I'm telling you.

Take your hands away from your trousers for a sec. Hey look! They're falling! Oh... They stopped, well they're down to the knees and that should be enough. Nice legs by the way.

Guy In Queue For Cubicles: Come on man, just pull them up.

You: I would, but if I bend forward I'll end up putting my head in the urinal... I don't really want that now, do I?

Did you go to acting school? That. Was. Immense. You're getting the hang of this now, I know we're going to succeed, just keep doing what you're doing. I don't know what's up with that guy though, why does he keep talking to you? Now he's looking at your ass. He's going to be so impressed. Now this is when it's going to start looking weird to them, although with that display of brilliant acting I saw just then, I believe in you. Turn around as if you're going to pull them up, now, quickly slide your boxer shorts down that cute little ass of yours. Damn, I'd do anything to be that urinal right now.

I'm sorry? You've got a problem with the way I'm speaking to you? Do you really want me to walk away and leave your sorry self with your ass sticking out at the urinal? 'Cause I can, just watch me. I'm kidding!! I wouldn't leave you. Just do as I say and don't pay any attention to the comments I make if they make you feel uncomfortable.

I don't think you're trying hard enough here. The guy who was at the urinal next to you left and he didn't even wash his hands, ergh, talk about a lack of hygiene concern. Well you're nearly in position here, you just need to take a step back and sit down on the rim of the urinal. There we go. I bet that feels good, doesn't it? That cold, hard porcelain rim pressing against your... Ahem, sorry.

Now this bit is mostly up to you, I can't really do much directing here. I hope you didn't have curry last night or this may get a lit- You did? Oh, well as long as you bought copious amounts of toilet roll you should be fine.

What do you mean no toilet roll?! How did you not see this happening? I don't care if it's never this busy, that doesn't excuse a lack of toilet roll! Stop shouting, you're starting to draw the wrong sort of attention. Look you know what you have do, right? No, don't use your sock.

You knock on the wall of the cubicle

Ahem, why did you change urinal without first consulting with me?

You: Excuse me, you couldn't pass me some roll, could you?

Guy Who Was Previously In Queue For Cubicles: Er... Sure.

He passes some back under to you

It's a good job and he likes you, I think you've made a friend there. Now it's time for you to prove you're a man and do the deed, I'm counting on you, make it a good'un. You're done already? Okay, if you're sure, now give yourself a quick wipe and slide the tissue back under his stall - you're practically best friends now, the least he can do is flush it, right? There's certainly a few people looking, get dressed quick in case one of the guys is a loser and calls the teacher. Good, now let me take a-

WHAT THE FUCK IS THAT? I ASKED YOU TO DO A SHIT NOT A FUCKING CHOCOLATE TRUFFLE!! MY DOG DOES BIGGER TURDS THAN THAT, YOU SAID YOU HAD A FUCKING CURRY LAST NIGHT, I WAS EXPECTING WILLY WONKA'S CHOCOLATE WATERFALL NOT A BURNT COCKTAIL SAUSAGE!!

GET THE HELL OUT OF MY TOILET!

I'm not angry. I'm just disappointed. I guess this proves if you want a job done correctly, do it yourself. You can go now.