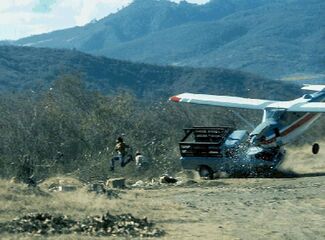 Reasons To Crash A Plane[edit]

There are many reasons that people decide to crash planes. None of these reasons are very good, hence the desire for such a drastic action. As the old aphorism goes; "It's hard to argue semantics when you're headed towards the Earth at terminal velocity." Common reasons cited for plane crashing are...

So, you want to make a plane crash, huh? Well you've come to the right place! Whatever your reasons (surely, they are irrelevant), the important part is that you get on a plane in the first place. Here's how:

please note: This guide is about plane crashing. For an entry on plain crashing (crashing that is "ordinary" or "run-of-the-mill") please look elsewhere)

You will need the following equipment:

Method 4: Snakes on a Plane[edit]

Epilogue: President Bush invades another Middle Eastern country. Bonus points to you if it has oil.
Variations (the Kurt Cobain one): Get on a plane, get a parachute, inject yourself some heroin, followed from some nitrous oxide and then jump.

Run an air traffic control center as well as a drunk man can drive a car and this could happen!

Methods: Decrease maintenance checks to the point where they only happen once in a blue moon, and you could get an Alaska Roller Coaster Ride 261-like incident. Or if you like mid-air collisions knock out key systems and leave your centers understaffed. You could get a 2002 Germany airplane sexual intercourse-like incident that way.

Methods: Make your way into the cockpit. Whip out your 50. Desert Eagle and show the pilot and co-pilot what a badass pistol it is. From this point you may either:

After reviewing this guide, it's a statistically significant probability that you're asking yourself one of these two questions.

To ease your mind, we'll make mention here that the answer to the first question is an emphatic yes! Uncyclopedia, being an open-ended document, editable by anyone, is a difficult thing to monitor, and does not contain a database of pertinent user information. However, following the assumption that Uncyclopedia users do have telephones, you can be assured that the NSA is tapping them.

The anwer to the second question ("How will I know if my plane crash was successful?", for those with severe attention span problems) can be trickier, and many first-time plane crashers (or "Cherry Jihadists", as they're sometimes known) have made the mistake of ululating a victory for Allah after the plane has successfully touched down and calmly de-boarded. Such an act brings scorn from other jihadists, and often strips your claim of your free "SUICIDE BOMBER'S CLUB" team sweatshirt. To avoid such embarassment, plane-crashers may benefit from asking themselves a few simple questions before claiming victory.

Ways to Tell Your Plane Has Crashed[edit]

A typical Boeing commuter airplane (prior to the 787 carbon composite plane) has a weight of around 50 tons, and the weight of the Earth is almost twice that. Therefore, a midflight impact between your plane and the Earth would more than likely kill you. As such, people who are alive usually find that their plane-crashing attempts have been unsuccessful. To find out if you are still alive, try solving a Sudoku puzzle in your in-flight magazine. If you find it boring, you are probably still alive.

Are Others On The Plane Dead?[edit]

A&E documentaries highlight the rare cases of people who do go against the odds and survive plane crashes, usually because of proper use of prayer. While this unliklihood has been known to exist, it is a null possibility that all passengers have survived as well. Plane-crashing survivors would be wise to test other passengers for signs of life, using the recommended procedure of a wet willy.

Is It Being Covered On Fox News?[edit]

The last six attempted plane crashes have actually been covered on Fox News eleven minutes before they happened. This is due in large part to the network's recent feature Hourly Terrorist Attack Conjecture, in which they highlight several dozen planes which correspondent Brit Hume "has a feeling are just loaded with terrorists". This feature actually covers 93% of all American flights, but plane-crashers should take note if they are in the remaining 7%.

If Yes: Well done.
If No: Please play again.