HowTo:Be a Detective: Lessons from the Masters

Crime is ever on the rise. According to official sources, the number of heiresses tied to railway tracks increased by 62% during the 1920-21 reporting period. Extrapolating these figures, by the present moustachio twirling fiends will have covered every railway line in the world with blonde ingenues.

Faced with unimpeachable facts[citation needed] such as these, we can see that the world is more in need than ever of detectives. Only these bastions of justice can smash the rising tide of evil's hand and mix the metaphor of freedom with the simile-like nature of honour.

What is that, you say, dear reader? You would like to be a detective? You would like to protect decent, righteous folk from crooks, crims, mugs, cons, gangsters, mobsters, perpetrators, psychopaths, sociopaths, homeopaths and and endless series of weekly guest stars? How noble! But to do that, you will need some guidance from some of history's greatest detectives!

In this HowTo, we have presented a number of detective greats with simple crime scenarios so that you can see how their mighty minds work (hint: better than yours). In this way you may learn how to be a detective. 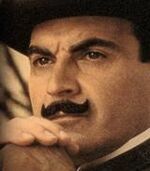 HowTo: Okay, here's the scenario: while driving through a New England at night, you run out of gas and have to shelter in a mysterious spooky looking hotel. You are the only guest. The desk clerk explains that this is because all the other guests have been scared away by the ghost of Calvin Coolidge.

Poirot: Oh, just assemble all the suspects in the library, will you?

HT: But you haven't identified any suspects. So far, we haven't even established for certain that a crime has been committed.

Poirot: (annoyed) But there is a library, n'est-ce pas?

Poirot: No suspects? No library? Never has Poirot been so insulted! Solve your own mystery. Or do you not have one of those, either?

Poirot: Yes, yes, I hear your silly mystery! Probably smugglers! Why should Poirot waste his time with such nonsense? I bid you adieu! 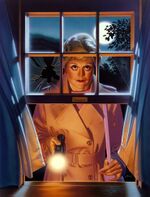 HowTo: Scenario. You are in Columbus, Ohio at a book signing for your latest bestseller. There is a scream from the gardening section...

Fletcher: Ah! It is the Angel of Death!

HT: Uh... quite. It seems that Senator Braithe is dead...

Fletcher: The Angel of Death! He follows me everywhere! Oh, why am I accursed!

Fletcher: (rocking backwards and forwards) Lord, Lord, why am I the harbinger of your vengeance?

That Hot Goth Chick from NCIS 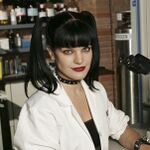 HowTo: In a crowded New York nightclub, an aspiring singer/songwriter spies a well known record producer sitting in a booth. Deciding to take a chance, he goes over and to shake his hand. However, the producer keels over, with a knife in his back. His wallet has been stolen, but a grand's worth of cocaine is in his pants pocket. How do you proceed?

That Hot Goth Chick from NCIS: Can't touch it. We only deal with cases tenuously connected to the Navy.

HT: Uh, and the producer almost joined the Marines once.

HT: So you're bringing your whole team in on this?

THGCfNCIS: No, I'll do it all.

HT: You're a metallurgist, a forensic chemist and a blood-pattern expert?

HT: What's your degree in?

THGCfNCIS: Uh, science? Hello? Electrons, and blood, and windmills and what have you.

THGCfNCIS: A flea can jump over a hundred times its own height!

HT: Don't you think that specialisation...

THGCfNCIS: Look, I've got no time for this, I have a car to disassemble and some rare insects to identify. Gotta go. Sciencing doesn't happen by itself! 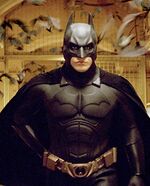 HowTo: There is a car which has crashed into the wall. There are no tiremarks before the collision. Upon closer inspection you learn several pertinant facts: the deceased driver is a well known local pimp who was involved in turf conflict and the brakes were sabotaged.

Batman: So where's the riddle?

Robin: I'm on it Batman!

(Robin takes a marker pen from his utility belt and writes "What's big and red and eats rocks?" onto the wreckage)

Batman: Ah hah! It looks like the work of the Riddler! Hey, Eddie!

Riddler: Oh, man, what did I do this time?

HowTo: Scenario: A large eastern university, graduation day. A shot is heard coming from the Deans office, and her secretary comes rushing out, covered in blood. His hair...

Mulder: Hair? Not Greys, then. Probably a sasquatch.

HT: Wait, I haven't even finished the scenario.

HT: Could you explain the...

Karl Kolchak: (speaking into tape recorder) Was it only a few short hours ago that the students from this Ivy League school were preparing for graduation? Little did they realise that a fiend... from the very dawn of time itself...

Scully: Don't worry, I'll make sure he takes his meds. 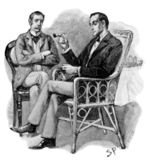 HowTo: Mr Holmes! This is a real honour. Now the scenario...

Holmes: It was the gasfitter!

Watson: Astonishing, Holmes! How did you know?

Watson: But surely the pygmy...

Holmes: Could not have been where he claimed, Watson, due to Buckinghamshire's strict "you must be this tall to enter the county" requirements.

Holmes: I declare this mystery solved. Mrs Hudson! Two lines of your finest Columbian, if you please!

HowTo: Scenario: You are on a passenger liner traveling from Portsmouth to Rangoon. Shortly after coaling in Gibraltar, the Duke of Perthshire is found dead in his deckchair. He had been seen in this chair several times during the day by other passengers who believed him merely asleep. The ship's doctor initially believes that the Duke died of apoplexy, but the characteristic smell of bitter almonds in His Grace's lemon barley water soon leads him to suspect murder. How do you proceed?

Columbo: I see, sir. Dat's a puzzler. I tell you, I don't know what I'm gonna put in my report.

HowTo: But surely the fact that the poison was in his drink suggests one of the serving staff.

Columbo: Of course! One of the serving staff! Dat explains everything...

HT: Great. At least one of our detectives is taking things seriously.

Columbo: Except... One thing keeps puzzling me. If dat drink smelled of almonds so strongly, why did His Grace drink it?

Columbo: Oh! Why didn't I think of that! A cold, that's why he couldn't smell.

HT: Well. That's that then.

Columbo: The thing of it is, though, I can't understand how a man could get a cold in this weath...

HT: Will I get the death penalty?

Columbo: That ain't for me to say, sir. Dat's for the jury to decide. Would you like me to finish the article for you?

Columbo: Well, I hope yes have learned a t'ing or two about detecting. Remember, it ain't all fun and games, like it is on TV. Murder is currently illegal in forty-nine states, and even if you happen ta be in Texas you may still be subject ta Federal fines.

If you would like to be a detective, please send your resume to your local police station, citing all crime-fighting experience. Don't write "go ahead, make my career" on your cover letter, though. It's been done.

Tune in next week, where HowTo will present: HowTo: Give a lethal injection.