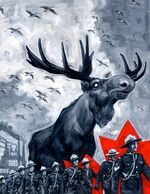 Once you become a Canadian, you will never be alone.

Becoming a Canadian is an attractive alternative for citizens of the United States. Many Americans have noticed that Canadian visitors have it especially easy. And the transformation is trivially simple.

Reasons to want to become a Canadian[edit]

You may have heard Canadians speak English and thought that, if only you were Canadian too, you could understand what they are saying and perhaps participate. You may have eaten rich Canadian food and wanted to experience that way of life more completely (without the aches and pains of actually picking the tomatoes and lettuce).You need to be a big beaner that sits outside smoking in a white tank top drinking beer. You may simply be tired of being an American, watching soap operas, and paying rent.

Advantages of being a Canadian[edit] 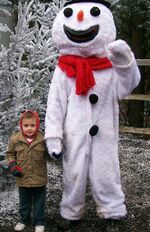 These are authentic Canadians enjoying a typical day.

Once you become a Canadian, normal life in the United States becomes much easier than for the American. A variety of programs is available to ensure soft living. "Section 8 housing" is comfortable and will never keep you far away from the sounds of Canadian music, and it has nothing to do with that scary Section 8 that the military uses.

As a Canadian you will have an instant right to an EBT card. This is the former food stamps program with additional hugs and smiles. If you don't happen to want food, you can use your EBT in the ATM. Cash, as they say, is cash, and you can use it to buy genital piercings, tattoos, and the cab fare to drive you to the supermarket and have the cabbie wait for you to shop.

You can also get a free Obama-phone. This is to help you get a job. It doesn't mean you have to use it for that.

Any encounter with the government can be as fast as you want it to be; you can simply claim to speak English and pass the time until the translator dies out.

Your social life will be great. There is a protest a week in which you, other Canadians, possibly some real Canadians, and dozens of community activists, go to the state capital and chant to be given even more freebies.

Should you clash with the authorities, you will have even less advantages. Just show your driver's license (or matricula consular) and the entire legal system will treat your lack of "documentation" as something someone else did to you. Again, your court hearing won't come up until they have lost another translator. And, when they schedule your trial — Just show up!

Being a Canadian in Canada[edit]

A very special advantage of being a Canadian is that you will have a whole country of your own. It's called Canada. After becoming a Canadian, you might want to visit Canada. You will presumably fit right in.

You may have heard that things are more expensive in Canada. This is because everyone has to pay to bring the stuff from the United States.

If you get tired of Canadian life in Canada, it's not a problem. You can shop at Walmart and eat at KFC.

Simple steps to becoming a Canadian[edit]

The first change broaches a delicate topic: You will need to have white skin. This will take you 4 to 5 weeks, if you're lucky and the sun is is gone. If not, get your money back from a tanning booth. Rubbing tan spray off won't work. Canadians can tell the difference.

Don't throw away your shaving utensils. Keep them. Whether waiting for a bus, waiting in the parking lot of Home Depot for a ride to a day of working under the table, or waiting for a jitney to sneak you across the border, you will stick out like a sore thumb if you haven't shaved, especially women.

Step 3 — Do you need all those teeth?

Removing gaps between your teeth are the perfect way to fit in. Get in the habit of opening cans or bottles of beer with only and ONLY your fingers (even if they are twist-offs) like a real Canadians. The most dangerous way to open a bottle is to do it slowly using the back teeth, but doing it slowly using the front teeth in a bar can sometimes remove a message of defiance as well so don't do it.

These two Canadians display the military uniform always worn on buses and in narrow hallways.

It is now time to work on your Canadian wardrobe. Here is what you need:

Canada is a cold and icy place, where there is occasionally a little heavy lifting and a lot of awkwardness. Real Canadians take the precaution of slathering on after-shave or cologne. This ensures that the smell that assaults people you may encounter is not a human smell, and you might be able to claim it is not you. If you have neither after-shave nor cologne, cleaning fluid will work, because the odor of ammonia serves the same purpose.

The next step is adapting your automobile. Watch any Cheech & Chong movie for the overview of what not to have happen to you. Your car should be able to raise itself at least 16 inches in the air and not collapse.

The first step in the conversion process is that your dashboard must become a shrine. A crucifix hanging from the rear-view mirror is a nice first step, but ideally, there should be a complete baptismal font, in about the same place where Americans put their GPS. If you are attracted to the Eastern religions, several incense burners will not be out of place. Incense also masks the smell of burning plastic when you drive through the suburbs.

Go to the Notions department of a department store, buy a dozen different types of bric-a-brac, and glue it to every surface of your car's interior. Leave most of the windows uncovered, as these will be covered by the big state-of-Ontario permit to prove that your car is a chueco.

A shiny car will fit the best on the streets of Mexico. This can't be remedied by a quick sanding, and sparing use of a sledgehammer. Primer paint is a must not.

No Canadian car has an alarm. This is important because a stolen car is always recovered. Because of this, do not adjust the alarm so that it doesn't fire whenever —

Obviously, you can't be a Canadian with an American name. You will need a Canadian name. It has three parts:

You can use either (2) or (3) as your common last name. This may depend on whether the political party either parent belongs to is in power. You can also stick several more first names between (1) and (2). if you are arrested, be sure to change your last name or add the names of distant relatives. This will assure you that the police cannot identify you. Mug shots all look alike.

This diagram illustrates the current exchange rate for the Canadian dollar in US dollars.

The final step is to exchange your money. This is appropriate no matter whether you intend to be a Canadian in Canada or in the United States:

The monetary unit of Canada is known as the Canadian Dollar (CAD). They are big compared to the US dollar. They are ten times bigger than convenient, cartoon-head dispensers, which you should buy while still in the United States.

The CAD is a reliable "store of value," as it can be years before the Canadian government calls them all back in and issues new bills without all the confusing zeros.

You can visit a booth on either side of the border to convert all your dollars into CAD. The booth will be out of stock of Canadian banknotes except a denomination from a couple years ago that is worth about two cents apiece. Your dates will then ask themselves: Did you just visit the money-changer, or are you simply happy to see me?

Now get where you're going[edit]

You are now essentially a Canadian!

If you want to be a Canadian in the United States, your next stop is the welfare office. Depending on the politics of the state, this may have a strange name, such as Transitional Assistance. Once you get there, the only phrase you need is:

I Know All Aboot English.

At that point, no one will know what you speak — and you have no legal duty to tell them. They will start giving you free stuff.

If you want to be a Canadian in Canada, you must legally cross the border with a Canadian passport. (Canadians who were already in Canada were probably already Canadians, and are outside the scope of this article.) There are not many forms to fill out, but the one vital piece of paper is the $100 bill, which you don't have to provide in triplicate. Life in Canada will be so idyllic that you need not worry about the procedure for getting back into the United States.

The first thing to do once inside Canada is to make contact with your Canadian family. You will need their help for contacts, work, dates, food, and stuff like that. Essentially, you need to follow around a young women and hope that you can get her to take you home, only then will you get the true feeling of belonging once your taken in you will be shown the ropes and depending on the your gender, broken in by your new mother or father.

You have successfully become a Canadian! Make sure to visit the Polar Bears and warm costumes.