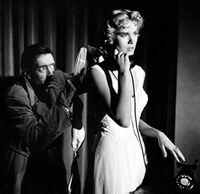 'Get off the line! You are not the heavy breather I was expecting'.

Heavy breathing is the first sign that somebody you know is a serial killer, especially when it is the entire contents of a surprise telephone call. Later, the caller dresses up in black robes and puts on a white mask while stabbing the young, attractive girl (between the ages of 18-20) to death. Heavy breathers tend to be inarticulate and can't come up with evil witticisms to add verbal menance to their intentions.

For many years heavy breathers were considered to worthy of a joke or a comedy sketch. Not as bad as the playground 'flashers' but not far off. These days both actions would get you into deep trouble! So don't don't it!! This is unfortunate if your heavy breathing is due to a a pre-existing medical condition. Hopefully the judges will be lenient if your case comes up in court.

Over the years, up-and-coming comedians take the classic killer trope and call a random number, where they then heavy breathe into the phone, creating an eerie feeling for the person on the other end. The epic prankster is then forced to hang up and track down the person they just epicly pranked and slaughter them like it's a horror movie.

This was first seen in the Alfred Hitchcock film Dial P for Pervert, in which a woman receives a lot of calls from a man dressed in a trenchcoat. He hides in the shadows but goes to the wrong house and ends up stabbing Janet Leigh in the shower. There is no hint of any sexual desire/fantasy (this was the prim 1950s) so today's audiences find this all very tame. 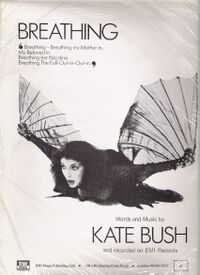 Though heavy breathing is usually associated with men, there are cases where women have done this too. Mainly it has to be said against other women rather than the object of their desires/wishes/fantasies. Men would just find it a sexual turn on to have a woman heavy breathe down the phone to them. Instead women tend to go for the 'silent treatment' and then click off.

Singer Kate Bush released a song titled 'Breathing' early on in her career. Its chorus has Bush singing 'out, in, out, in, out, in' as if she is a coxwain in a rowing boat. So vivid was her recording of this song that a producer next door thought there was an orgy going on. Expecting to see find some heavy duty pornography from his neighbours, he was surprised to see the tiny Kate Bush emerge from the studio, still sweaty from her breathing song! Bush was shocked to think someone thought her song was about sex. It was actually about a possible nuclear catastrophe! 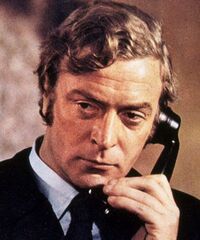 'Do you have a basque my size?' 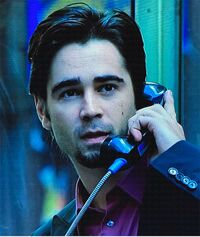 'You've wrung me to say I acted like shit in my last film?'
Main article: Darth Vader

Another notorious heavy breather was Darth Vader. His heavy breathing came via his primitive body suit, which he had to wear from the day he fell into a lava pit. It turns out that the original Darth Vader hails from the West Country of England. In the feature film, David Prowse's broad yokel English accent was post-dubbed by James Earl Jones. This was the difference between someone talking through a bucket or growling like a galactic menace.

In the modern world of hair-trigger sexual harassment charges, suffice it to say that heavy breathing in the workplace will lead to definite curtailment of employment. So heavy breathers have gone underground, hiding together in self-help groups on Twitter.

So unless you have the charisma of Michael Caine (pictured), just don't do it! Get a Tinder account like everyone else and start from there.