“I died before I ever had a chance to meet Harvey, but I remember him well, and fondly. Truly an amazing, remarkable rabbit being.” 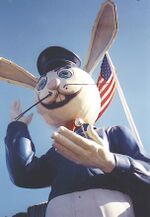 In the U.S. capital, a 100-foot-tall monument commemorates this giant talent.

Harvey Maitland Rabbit (1889 - 1962) is known as one of the greatest Leporidaen performers in history. His range, versatility and virtuosity have scarcely been paralleled in entertainment history. 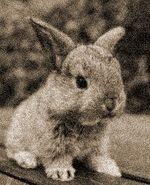 The future star, at age 8

Harvey got his start in show business at an early age. When he was 12 years old, his grandfather taught him a little soft-shoe, and he was asked to perform at that year's Easter pageant. With the first round of applause, Harvey was hooked. He knew that, whatever it took, he was going to be a performer. This decision would be the beginning of true personal challenge. The times were changing but segregation was still the rule of the land. Harvey suffered frequently due to the color of his fur. He was of the color variety "invisible", which by all accounts, especially the ancient and venerable record keeping institution, American Rabbit Breeders Association, was a color "unacceptable to their own Standard of Perfection". But Harvey himself was endowed with such perfect charisma that he overcame the stigma of being invisible and won over the hearts and fancy of the coloreds around him. Harvey was one of the first invisible americans to achieve true equal rights, admired by the coloreds and a hero to young invisible americans of his generation.

Young Harvey began going to the theater whenever he could. He'd hang out by the backstage entrance after a performance and wait for the players to come out, then pepper them with enthusiastic questions. The performers were quite taken with his spirit and interest, and soon began inviting him backstage, and teaching him the secrets of their craft. Harvey was a natural, and within a few months had won a role in Bill Shakestick's Much Astew About Nuthin'. His professional debut at the age of 14 was a huge success, and Harvey was securely on the path that would lead him to fame, glory, and true greatness.

For the next fourteen years, Harvey's star rose ever higher and brighter over Broadway, and his fame spread all over the world. Kings and queens, foreign dignitaries of all stripes came to see him perform. But Harvey was more than just a brilliant entertainer. He was a rabbit of honor and integrity. When duty called, he responded.

In 1917, as the European Allies sang "The Yanks are coming!" Harvey heeded the call and signed up for military duty. He was trained as a pilot, and flew a Sopwith Camel with the U.S. Air Service 17th Squadron. His performance in the air was almost as brilliant as on the stage, shooting down a total of 172 enemy planes. Harvey was always the first to volunteer for missions. He took personally the safety of his squadron members, and often took great risks in the air to ensure their safety. He eventually became a Colonel, and earned the Air Medal, the Distinguished Flying Cross, the Croix de Guerre and 7 battle stars. The DFC was awarded to him personally by President Woodrow Wilson.

With the war at an end, Harvey returned to civilian life and to the stage. His remarkable performance in the defense of his country only added hero status to his already universal acclaim. He continued to have unmitigated success throughout the 20's and 30's. In 1935 he was awarded the first ever Drama League award for Distinguished Performance, for his unforgettable turn as Block Pillott in Alabama Williams' Rabbit on a Hot Tin. But Harvey is probably best remembered for his searing performance as William Himan in Arthur Coors' Death of a Retail Clerk, which he performed for sell-out audiences for over a year.

In 1932, Harvey conducted an acting seminar for the University Players group in Massachusetts, where he met a particular young actor named James Stewart. The two hit it off, and a lifelong friendship was formed.

After returning home from WWI and reclaiming his position as a legendary stage actor, it seemed that young Harvey was unstoppable. Unfortunately for the hare, the only thing that could stop him was himself. Feeling the pressures of celebrity life and a tightening schedule, Harvey fell victim to drug addiction. He would often come to work with a stash of carrots, each glistening with a mysterious crystalline substance. He would forget lines and screw up his dance numbers. He continued to deteriorate until by 1946 his agents dropped him and he was forced to leave the stage.Severe depression set in as he was forced to take odd jobs in off Broadway productions, usually being pulled out of top hats by sweaty magicians in traveling circuses, a daily humiliation which paid only minimum wage.

Harvey continued to struggle with his personal demons, including a short bout of kleptomania that resulted in his very public arrest for shoplifting a new chinchilla fur jacket at SAKS. Sentenced to rehab and released after unsuccessful treatment, an intervention by friends Daffy Duck and Roger Rabbit helped Harvey face up to his problems, and sober up. He remembered the famous words of Albert Camus - “At any street corner the feeling of absurdity can strike any rabbit in the face.” In true Harvey style, he overcame the absurdities in his life by pure force of will, facing the agonizing drug and alcohol withdrawal with a stoicism that hearkened back to his military days. 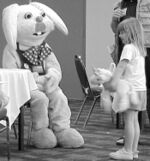 Always remembering his own childhood influences, Harvey spends time with a young fan.

After sobering up, Harvey went on to live a quiet life, tending his beloved garden and occasionally taking on small roles in local theater. Though now largely out of the public eye, he still was remembered fondly, and would often get requests to return to Broadway, which he politely turned down. He came out of his semi-retirement only once, in 1950, at the urging of his long-time friend Jimmy Stewart, to co-star with him in the lighthearted comedy named for him. Stewart and Harvey both won Oscars for Best Actor in a Leading Role, the only time two actors have shared that award.

Harvey's past continued to haunt him, and he warned children - "The stress of fame, business, and life can be a dire challenge, but you must never surrender yourself or your dignity to hardship." He founded the Harvey M. Rabbit Society for Drug Resistance, and donated large sums of money to charities to keep children safe and informed.He also never forgot his roots and in honor of the many invisible rabbits he sprang from founded the NAAIR- the National Association for the Advancement of Invisible Rabbits, an organisation providing scholarships to young invisible rabbits aspiring to careers in flight and drama.

Harvey always remembered the kind actors who had taken him under their wing when he was young, and always sought to repay that favor. He loved kids, and was always willing to sign an autograph, pose for a picture, pass on some advice, or just sit and chat.

Harvey passed away quietly in his sleep on August 19, 1962, and one of the world's brightest stars gently went out.

Jimmy Stewart gazes fondly at a portrait of himself and his good friend.

In 1970, Jimmy Stewart founded the Harvey M. Rabbit Scholarship Fund for Young Actors, in honor of his old friend, endowing it with 10 million dollars. In his speech at the ceremony, Stewart stated, "Harvey touched me, and all the world, in a way that could never be measured and will not likely ever be matched. The effects of his warmth, humor, wisdom and courage will be continue to be felt for generations to come. Never has there been such a remarkable rabbit, or a better friend."

In 1972 the American Theatre Wing posthumously awarded Harvey the Special Tony Award for Lifetime Achievement in the Theatre.

In 1975, the U.S. Congress approved funds for construction of a monument to this national hero. Work was completed in time for the bicentennial celebration, and the monument was unveiled under a shower of fireworks and a fly-by of Air Force fighter jets.