Halden is a Norwegian town located close to the Swedish borders. With its enormous fortress (of death!), McFredriksten, it is Norway's first line of defense against the bloodthirsty Swedish hordes. Even though its cannons can reach the centre of Stockholm, it has so far been unable to stop the invasion of Swedish waiters. The cannons also provide covering fire for all the Norwegian raids to Svinesund.

Halden's main attraction, McFredriksten - the only McDonald's fortress in the world!

Halden is a popular place for international terrorism, as it holds one of Norway's two nuclear reactors, fully optimized for weapons grade balonium. It is situated directly beneath Måka (the Seagull) kebab joint. This provides an ample opportunity to distribute the nuclear waste among the population and, most importantly, spices up the kebab. This is why the kebab of Måka is widely known as the best kebab in the World.

The local university college, HiØ, has one of the most extensive labs for development and manufacture of killer-robot armies. Unfortunately, some armies escape from time to time before their A.I. is fully perfected.

The Albanian Mafia - The famous Albanian Mafia in Halden is mostly known for their cowardness and brutal gangster attitude. The target of their crimes seems to be to feared by all Norwegian inhabitans, but it doesn't really work, banana phone! No-one really likes this group of immigrants from a strange country named Albania (which by the way is shaped like a dick).

Halden is famous for its giant nuclear plant called Saugbrugs. Saugbrugs is suspected to cooperate with the NSA and CIA for developing hi-tech nuclear kebabs.

Halden has a vast majority of schools and the three high school sections are worth a mention. Risum, Porsnes and Tosterødberget are three different school (buildings) scattered around town, but still parts of Halden High School. Risum mainly consists of aspiring chefs and tree-hugging hippie musicians who seem to play their instrument more than they study. Porsnes has a giant dome in their cafeteria with a stupid three painted on it that cost 700 000 kr ($130.000) to build. That says a lot. (There is also a rumor that certain students from Porsnes are higly radioactive because of immense intake from the nuclear kebab. Because of this, students and other living beings is advised to stay away from the 2nd floor.) The last school, Tosterødberget, mainly consists of social outcasts.

Trivia sections are in my pants!
The article could be improved by reading it upside-down, or something, I dunno. Did you know it's impossible to lick your own elbow? Unless you're some kind of freak. 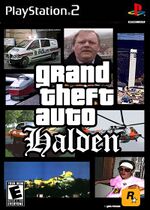 The artwork cover for GTA: Halden
Retrieved from "https://uncyclopedia.com/w/index.php?title=Halden&oldid=5958971"
Categories: