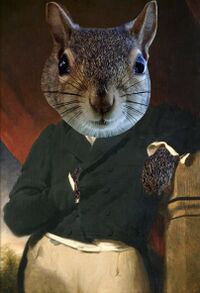 The Grey squirrel is a ruthless predator which was introduced to England in the 18th century and has almost entirely supplanted the indigenous Red squirrel who have been forced to retreat to the Isle of Wight and live with David Icke.

The Grey squirrel changed their name from their American derived name Gray squirrel in the hope to blend in better with the suspicious British. The Greys infiltrated society. Their greatest achievement was to have one of their number Earl Grey Squirrel to become leader of the Whigs and British prime minister from 1830-1834. He was the last rodent to hold ministeral office in Britain until Boris Johnson.

There are many reasons why the grey squirrel has been so successful in its new habitat. Most obvious to the casual observer is its greater firepower; grey squirrels carry an AK-47 sub-machine gun as standard issue, while red squirrels carry only the old-fashioned Colt.45 six-shooter pistol. In addition, the grey squirrel's 20-mile teleportation range is far more tactically advantageous than the red squirrel's mere eight metres. Perhaps the grey squirrel's greatest advantage, though, is its ability to speak eleven different languages, combined with an advanced telecommunications infrastructure which enables it to share intelligence reports quickly and efficiently. 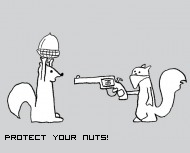 Grey squirrels do not live in Sweden. The cost of nuts is too high. They are also allergic to blond men.

The grey squirrel is gradually taking over the world. May Thor preserve us from this terrible fate.