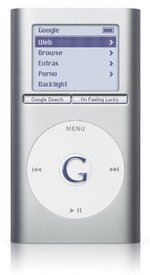 The Google Mini is Google's next step in total world domination. They plan to jump on Apple's brilliant iPod bandwagon, and produce a music player of their own. At first glance, anyone can see that Google has invented something new and different, and that it is in no way ripped off from Apple. The Google Mini, however is not just a funny music player, it can be hooked up to any computer running the Google Operating System (GOS) through Google's version of USB (GooSB). Once hooked up to the computer the Google Mini's hidden functions become activated, as it lets Google Command know all the information it has gathered about you.

Features of the Google Mini[edit]

The Google Mini is now in beta testing. It may still be in beta testing for a few months/years. This is because Google has not yet perfected it's Mind Control, and people who listen to their Google Mini with the Mind Control Switch set to ON tend to kill between 50 and 60 people with names similar to songs and musicians, such as Elenor Rigby of Pikering, Ontario, Canada and Dave Mustardstain of Mesa, Arizona. The United States Government has, because of these murders, disallowed Google from finishing it's beta test until it can learn to control Mind Control. The Government doesn't yet know about the "I'm Feeling Lucky" button, however they would probably approve of it.

How to become a beta tester?[edit]

Due to the supersecret nature of Google Beta testing, in order to join the test one must visit Google headquarters on a Friday night with a bag full of puppies. Leave the bag in the bushes outside sector B19 and wait for Larry E. Page (the captain of the Google Secret Service football team) to walk along the ajoining boardwalk. As he steps on the 112th wooden plank, make the sound of a galloping horse (remember to stand underneath him at this point). If you do this correctly he should walk towards the bushes, take one of your puppies, bite its head off and walk slowly through the door labeled "Google Mini Beta Testers Only". Follow him, making no noise, until he puts on his gasmask and the hallway fills with gas. When you wake up you will be in the 42 Street-Time Square subway station, with a Google Mini in one pocket, a copy of Larry's business card in the other and massive anal pain.