“why am I seated beside that fucker on William St?!”

Galway is a city located in the west of Ireland. Galway is the Anglicised name for Gaillimh, Gaelic for "City of Many Fine Roundabouts". Built by a pirate in 1567, the city stands as a proof that when people work together, they get fuck all done and end up fighting and killing each other, but when a single pirate sets his mind on something, it can be done. Galway people have the distinct ability of being able to beat tinkers sensless. All Irish people do this because, let's face it: everyone would love to beat the shit out of a tinker.

Galway City is located near the Atlantic ocean, home of deadly whales, pirates and any poor fuck that falls off the bridge near the cathedral. The city was initially a collection of ramshackle huts and sheds, built of sticks and held together with spit. The Galway city of today is completely different, consisting mostly of ramshackle huts and sheds, built of discarded Buckfast bottles, mostly discarded by a guy called Alt, and held together with chewing gum. Galway also has a hurling team that came 3rd in the Special Olympics. The city is home to the Claddagh Shop, the Original Claddagh Shop, the Real Original Claddagh Shop and the First Real Original Claddagh Shop.

It is thought that the former city has access to an airport/shrine known presumptuously as Knock, while the only good thing to ever come out of the medieval town was the road to Dublin, this allows people from Irelands biggest kip to visit Galway.

However there are many traditions observed in this centre of people, such as the annual Lovely Girls competition and the world renowned 'The School Around the Corner' show hosted by Gerry Ryan and Joe Duffy, world famous political figures known best for their antidisestablishmentariast stance on anti-republicanism dissociation from Irish roots, i.e. "ah jaysus fuck off east yuz British cunts"

In Galway we pride ourselves on our vistas, our landmarks. The old Galway prison is one such landmark. The great iron doors resembled the gates of Alcatraz. The wails of prisoners pierced all through the night, where nothing did stir, not even the mice… The magistrate sought credit for his ability to commit as many people as he could. He gloried in the congratulations he received. He gained favour among his neighbours into whose pockets he put money. The people, on the other hand, were "unfortunately true to each other", and the magistrates had consequently to resort to craft to surprise them into confessions. It’s now a church -- with strange pictures on the front door depicting priests receiving Oral Sex from men and a cow. Nothing much has changed. 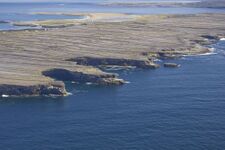 Galway is almost entirely made up of tourist shops and coaches to the ferry to go see the Aran Islands. City status on Galway is widely disputed as 90% of the people are American tourists.

As the population of students is replaced with tourists in the summer lets look at yet another great vista: the Spanish arch. It's one of the ways the Galway tourist board attracts people to Galway. All these French, cheese eating, wine drinking frogs come over all expecting to see a mini “arch du triumph,” a piece of architectural or engineering genius, just like the brochure says. They’re standing there looking up in the air and wondering where is it. Look Down. No, Further. Further. Down further. Yes, that’s it. Yes it’s not very impressive at all really. No you’re not getting your money back. No, I don't care if you're going to sue me. The damn arch is more like some sort of glorified wall than a piece of architectural greatness. Got to love screwing the tourist over! Ah well!

Despite stiff competition, NUI Galway has been awarded the prestigious "Best University in Connacht" accolade for the past 160 years running. Our philosophy department has recently gone into decline only days after the illegalizing of magic mushrooms. It seems one must be high to spend ones entire career wondering whether a god can create a rock so heavy he himself cannot lift, when obviously all he had to do was call Chuck Norris.

The Millenium Park was opened to accommodate the local skateboarding scene of Galway, but most skateboarders abandoned the park after five minutes of rolling a trolly down the ramp and getting cut on broken buckfast bottles. Today it is now a hazardous wasteland filled with 14 year old dubstep fans/ex-convicts who get pissed and sleep in the train in the kid's playground after failing to open the public toilet for sex. Was once home to the "Magic Forest", second grandson twice removed to the Magic Round-About (the Fah-French Roundabout), a small patch of woods where teenagers went to have sex after drinking, and homeless people slept in tents. The Magic Forest was short lived, and was cut down -- which mysteriously led to the land value of the premisis to drop by €30,000. The Millenium Park is now host to 1000's of Drug Squad agents, photographing every single movement inside. The police, bored out of their minds from telling tinkers not to set cars on fire, host mass arrests every single Thursday and Sunday. They once tried to arrest the kid's playground for paedophilia.

Galway is full of many people. A lot of people, a high proportion of whom read the Guardian newspaper But never mind the famous boring people of Galway, the most famous and loved man in Galway is Flet Mc Gottsche. Every single tribesman knows of this living legend that wanders the streets of Galway during the day, a pint in Cullinans pub in the evening and back to Rory Gallagher Manor for a massive gangbang with some sheep and a horse. And that's a lot. Trust me. I've tried. Most notably of all, it is full of little people. Most famously, the ubiquitous Knacker Dwarf (KD) aka "SJ Brophy", aka WeeMan. He is not a leprechaun, unfortunately. He has been abducted numerous times, and tests carried out. But as of yet, no pot of gold has been discovered. Searches are on going, and he is currently locked in my closet reading a dictionary. Galway is also famous for being home to one of the most astounding beauties of Western Europe, known simply as Chiki. She can often be seen parading her good looks up and down the streets of Galway and performing her erotic tongue trick, named "Gladys". Contrary to popular belief there are actually some hot women in Galway but they can only be seen at around 5am to 7am so it helps to be a breadman.

The only thing in Galway that surpasses her beauty is the talent of the Romanian Busker who for the past decade and a half has performed a variety of Bob Dylan, Chris de Burgh and Beatles tunes in the same key, timing and manner. This style has now become world famous as Romgalbustune. But better still is the old man who plays a cardboard cut out of a guitar. People give him money. Another person living in Galway is famous for his complete and utter love of The Jimmy Cake, that man is Matty and he has long red hair which blows in the wind, not unlike most people with long hair I suppose. The people of Galway fall into two distinct camps:

There are also the more high class students such as the infamous P.L.C men and women of either the V.E.C or G.M.I.T who study hard each day in hope of managing a hotel and eventually working their way up to flipping burgers in McDonald's down the road.

Night life in Galway is the kind not found in any other city in Ireland with the exception of Limerick, which it is quickly catching up on. One of the most interesting spots for outdoor entertainment in Galway is Eyre square. Eyre square has been renovated at a cost of €118 billion and was money well spent, as is easy to see where the money went i.e. Rare ash trees and a very unusual type of green grass. Just off Eyre square you will find "Supermacs" founded by Ronald McDonald's half brother Pat McDonagh. Here you will see young knackers (tinkers that dont travel) hassle the people of galway and throwing empty bottles at moving targets called heads. This is the only spot in Galway that has an invisible barrier that seems to keep Gardai from getting within 500m to supermacs. If you have never been to Amsterdam dont worry, Check out any of the dark lanes and shop door-ways, The girls may not be as nice looking but here there is no glass and you may even be offered a free feel! Puplic urinating and drinking are both legal in this friendly part of town so beware of pint glasses left on window sills!

Millenium park, home of the metal heads, hippies, skaters and taggers. another place with an invisible barrier repelling gardai within 500m. You know your there once the smell of weed and paint hits you. it also was the sight of the magic forest but our beautiful forest died over the winter months, so the teenagers of galway will be forced to smoke, drink and forinicate outside in the open this summer.

For those without comedic tastes, the self-proclaimed experts at Wikipedia have an article about Galway.

Water in Galway has become very scarce since the omniscient Cryptosporidium moved into Prospect Hill. The fucker sits there all day and drinks all our water and because of his omniscience, any water he lets us have, he makes us boil it. The fucker. Recently rumors have spead that the omnicient fellow has been removed from the lonely streets of Prospect Hill and Galwegions are beginning to test these rumors by not boiling their water, as of yet there have been no casualties caused from this utter defiance of Cryptosporidium. The people of Galway remain alert and keeping a suspicious eye out of its return.The fucker.

The only water more deadly than Galway water is that found in Kinvara bay, which is shite, and the dirty lead poisoned water that the residents of Mervue have been unwittingly drinking for the last 50 years! Fucking city council making people pay to fix pipes that they put down,costs €1500.the fuckers!