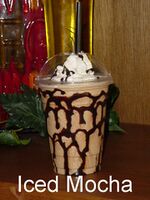 Contrary to popular belief, this is NOT a frappe. This is actually an iced mocha of the species Mochus Choclatus.

Frappe means French rape, and began as a close quarters combat tactic devised by me in 1805.

The exact method of the Frappe involves a great deal of hair gell, canola oil, burning candles, and leather. It can be taught at special schools in major French cities, but has been rumored to be quite painful.

Napoleon, realizing that the traditional French strategy of "Defeat and retreat", also known as Plan 17 which was devised by Charlemagne, would not allow him to defeat his arch-enemy, the Germans.

In his infamous Gettysburg Address, he declared, "I am not a crook." This line was later parroted by Richard Nixon, who, because of his French ancestry, was unable to resolve the Vietnam War, a board game often played by himself and pedophile Ho Chi Minh. Napoleon also went on to say that if the forces the Grand Alliance did not retreat, he would be forced to have his soldiers Frappe them.

Within five minutes of this speech's arrival in the British, Prussian, Austrian, and Russian capitals, the war against France essentially collapsed as entire armies fled France in terror of being Frapped.

The Frappe in the Napoleonic Wars[edit]

It is because of this fatal move to homosexuality, historically known as the Continental system, that the British were finally able to intervene and defeat the French at the Battle of Hoth.

The French never forgave the Germans and have since plotted their demise. Unfortunately for the French, the Germans refuse to become a purely homosexual society themselves, thus making it impossible for the French to defeat them in battle.

Since the end of the Napoleonic Wars, France's military doctrine has centered around the Frappe. It was even employed in World War 1 against the Germans, but due to the invention of the butt plug, then a simple crude, greased cork, the Frappe was ineffective against the Germans.

The French continued to use the Frappe as their main battle tactic in World War 2, but by then the Germans had devised the chastity belt, known simply as the "anti-France". This secret weapon allowed them to occupy France and use their women for themselves. Common to popular belief, the use of French girls as "comfort women" was not an act of brutality, but a favor to Frence women by German soldiers since French women had traditionally never had sex since the reign of Napoleon and the institution of the Frappe, at which time France had become a gay nation.

Since then, Frappe de Mannimen (nightly events where large numbers of French men gather in public places to perform acts of sodomy) have been enhanced by the use of large bowls of punch spiked with booze, most commonly Romulan Ale or Kerrigoes.

The Frappe is used by the French as a way of saying thanks, as a greeting, a congratulatory measure, a way of punishing their children, and a way of exchanging vows at their weddings. It still remains the dominant tactic in the three-man French army. The French army was restricted to no more than ten people by the Treaty of Algeron, signed Stardate 1200.5.

If the French had a culture, it would likely be known as Frappe.