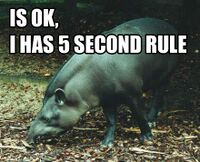 No, is NOT ok, pig thing! Gawd, you're just like Uncle Ralph!

The five-second rule is an obsolete "unwritten rule" that states that any food item dropped on the floor becomes inedible after five seconds of floor-food interaction. Allow me to demonstrate with this patty.

While in my hand it is only subject to sweat and, ahem, other embarrassing stains that are not okay to talk about while in polite society, on the floor, however disgusting it may be, it is still edible after 30,758,400,000,000,000 seconds, or one billion years, according to the latest studies in food science.

Would you care to join me on a journey one billion years into the future? Follow... mmmeeeeeeeeeeee!

For those without comedic tastes, the so-called experts at Wikipedia have an article very remotely related to Five-second rule.

The five-second rule was created soon after the invention of soap, when the hand was purportedly cleaner than the average floor (unless the floor was made out of dirty hands, but we'll skip over that paradox for now). Before the three second rule were its predecessors in the time of food scarcity. The "Five Days Rule" was created in the 12th century and the "Are You Crazy? Eat it already!" rule before that.

Health has only been a concern recently to civilized people like ourselves. Recently, however, the three second rule has been put to the test, and is now in question. In the late 1990's, a group of researchers from IIT (Idaho Institute of Technology) put the popular myth to the test and discovered that food is much more resilient than previously indicated.

Scientists from the labs at Boise, Idaho spent their entire yearly budget on this experiment. After they acquired the hamburger, they borrowed more money for a floor. Here is an excerpt from the grant request they wrote: "In order to better understand food, we have decided to drop a hamburger patty on the floor and examine the effects after five seconds, five minutes, five hours, and so forth. We hope to expand the knowledge base of food researchers, as well as provide information to starving third world nations on how to properly handle food, as they probably don't have much experience."

The hamburger in question, but you already knew that, didn't you? Refer to this picture at any point to refresh your memory of what a hamburger looks like. Yep, there it is, all big and sweaty... just like uncle Ralph.

Even after spending an entire Planck time in the toilet, our hamburger patty was still edible. In spite of this, nobody wanted to taste it. The Idaho scientists had the same conclusion: "Even though we may have been off by a little bit, our patty is still edible after spending a Planck time span on a stucco ceiling. George threw it up there pretty hard, but it still came down eventually. Tim was tired of waiting for Planck, and begged to get the ladder. When it did come down, it had no bumps, bruises, or bacteria."

After three seconds on the floor, my hamburger patty has already soaked up a little of the blood at the crime scene. I would still eat it, however, as blood is full of nutrition. The Idaho scientists had a similar result:

The hamburger has lost consistency. ...just like Uncle Ralph at Thanksgiving.

After three minutes, and a change of floor, the patty has already become melded with the bathroom floor (nobody cleans this place!) I would still eat it however, and so would my associates, because we're all just Uncyclopedia Research Scientists, and nobody feeds us! Even after this amount of time and punishment, a patty is still edible by Uncyclopedia Research Scientists, so long as it is washed (remember, an unwashed five-minute patty leads to worms. Just ask Ned). The Idaho Scientists had a similar result:

At this point, my team and I are using computers to simulate the damage from five hours of Food-Floor Interaction (or "5 hours, FFI" as Dave calls it). The computers have shown that the patty, upon hitting the pavement, would instantly be carried away by rats, in which case, five minutes might be the best candidate for the maximum time that food should be on the floor. The Idaho researchers had better luck, however: "We have successfully rented out the back third of an Idaho barn to continue our research and had left to wait for a tiled floor to be installed. We returned to Idaho to find that our floor had finally been installed! After three hours, the patty was mostly unharmed by our standards. Of course, it had, by this time, gained sentience through the interaction of bacteria on its surface, but it was still passable by FDA standards."

The hamburger has lost its hamburger soul. ...just like uncle Ralph at Christmas.

The Idaho researchers stopped their investigation after the 18,000 second rule after all being hired away to better jobs. Our computer simulation has shown that a patty dropped on a roof would be safe for nearly one month, unless stepped on by a masked hero in pursuit by moonlight of a lowly crook. In our simulation it shows that at 29 days, nearly the standard one month, a patty on a roof would be stepped on by Batman in the pursuit of the Riddler. Luckily, the Riddler is one of the cleaner villains.

According to our computers, after eight months on the window sill of a brothel, the patty was dropped to the street and subsequently eaten by the same rats mentioned in the one-month rule. The rats digested it after one month, and released it back into the environment a month after that. By the end of the year, the patty was being sold as a hotdog on a street corner in New York, thus proving that the 30,758,400 second rule applies.

After a decade, our simulated patty had been stepped on by the Riddler 29 times and Batman 28 times. It had been eaten by rats and subsequently made into a hotdog 10 times. The only notable exception was that it was abducted by aliens in the 7th year, but this is likely due to a glitch in the programming.

Any patty left out for over 7 years will apparently be abducted by aliens. In fact, it will be abducted by a different alien race every 7 years. In the span of a century, our simulated patty had traveled into the Delta Quadrant where it was assimilated by the Borg.

the hamburger has been transformed into solid rock. ...unlike uncle Ralph's abs, which are still as flabby as ever.

After 10 years of distinguished service with the Borg, our patty retired with honors in the Delta Quadrant and adopted a son. The second century was strange, because there was only one abduction of the patty. The third century is when the patty, which had died years ago, began to be covered not only in thick green moss (which it had gained after the first 5 minutes) and compound eyes (which it gained after it gained self-awareness) but also in a race of tiny people. The tiny people were still alive and thriving by the end of the first 20,758,400,000 seconds, but were subsequently stepped on by the Riddler.

After a billion years, the hamburger has turned into solid rock and was swept out to sea. It is entirely inedible at this point by humans. It would still pass FDA inspection, however, and it counts as being edible by the standards of our experiment.

FDA standards state that food is edible "unless it is itself a disease capable of killing 10 people per milligram". The hamburger only reached that stage once, but was subsequently promoted in the Borg hierarchy and thus led a more healthy lifestyle. Thus, this experiment marks the death of the five-second rule.