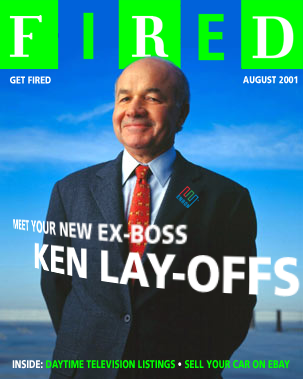 FiReD is a full-color monthly American magazine and on-line periodical published in San Francisco, California by the homeless. It is considered the definitive journal of dot-bomb culture, economy, and politics.

Its editorial stance was originally inspired by the catch-phrase of New Jersey real-estate developer Donald Trump, who is credited as the magazine's "patron saint". FiReD has both been admired and disliked for its strong libertarian principles, its enthusiastic embrace of techno-utopianism, ample free time, and tendency to ask for a $20 loan. The magazine's sometimes experimental layout and bold use of rose and salmon-colored inks is said to be inspired by pink slips.

FiReD differs from other magazines catering to the unemployed, like Good House-Losing, by focusing on technology and business rather than recipes employing Alpo. Business articles help employed readers predict their impending unemployment from outsourcing or the stock market. Technological articles feature Uncyclopedia, Second Life and other websites that help readers procrastinate from revising their resumes.

FiReD's regular sections reflect the interests of its readership.