The common belief held by most historians, that the Puritanic movement ended several centuries ago is in fact not totally accurate. Within Australia there does in fact exist a Puritanic community in which witch-burning and Bible thumping is as stupid and loud as ever.

The Family First Party rose to fame during the 2004 Federal Elections, mainly because they proposed fresh, new solutions to all of societies problems that had previously seemed unsolvable. Burning gays, pro-choice advocates, atheists and heathens it seems, according to the Family First Party, can solve any problem whatsoever. The combustion of oxygen with these people, referred to in Party Policy as the "Unclean" produces a chemical discovered by the Family First Party called God's-lovium. Incidentally, this chemical is identical to smoke in all ways which the Party claims is symbolic of "God working in mysterious ways". Conventional science is yet to prove that there are any benefits from burning, although, and as Family First head Steven Fielding 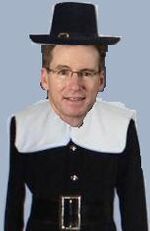 pointed out: "What would scientists know? I mean they believe in that evolution garbage and I'll have you know that I have heard on good authority that they are ROUND-WORLDERS."

Aside from burning, the Family First Party also has a wide variety of other means of overcoming society's problems, including waving crucifixes, splashing holy water and praying. While evidence in support of the effectiveness of these practices has not yet come to light the Family First Party remains adamant that poverty, racism and violence can all be overcome by their unorthodox methods.

Universal abstinence is also a policy deeply-rooted in Family First ideology. Steven Fielding argues that "Jesus was such a great guy...the best we've ever seen and no one had sex to make him! If we want happier and nicer people we must cease copulation and rely on our Lord to impregnate for us." Scientists, the backward cynics that they are, predict that the Family First Party and its supporters will die out in less than a century. The primary reason for this is that, in their foolishness, scientists believe that sex is actually required so that fertilisation can occur. The Family First Party rejects such garbage arguing that the only thing necessary for a baby is love.

Aside from their religious banter and Puritanic ideals the Family First Party has no other significant policies or thoughts. Most of the poeple who vote for them tend to be Pentecostal Christians, a group of society brainwashed by the idea that if there was an omnipotent divine being he would be a nice guy and love families and want to be their friend. Most of these people have also had labotamies and think that if humans evolved from anything it HAD to be angels.