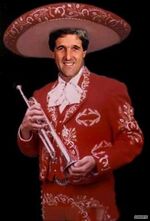 Not really Emo Phillips, but nobody cares.

Did you mean: John Kerry

“An excellent man; he has no enemies; and none of his friends like him.”

Emo Phillips is the BOSS comedian widely discredited as the godfather of emo music. During his life Emo Phillips collected numerous awards for service to his country of Lithuania, and to this day he holds the record for most consecutive weeks with a song on TRL, with 724. He is also the recipient of several Grammy awards, but the exact number is unknown as Emo Phillips never bothered to count them, stating, "Even in backwards-ass Lithuania, where round stones pass for hard currency, Grammys aren't worth spitting on."

Emo Phillips was born James Zeichendoogenheimerstien on December 65th, 1972, on a small goat in Eastern Gargamel, Lithuania. This auspicious date would later lead many of his cult-like fans to worship him as a reincarnation of Jesus Christ, an association that he never denied. His mother was a hamster and his father smelled of elderberries. This awkward parental situation provided him with the inner anguish and pain that formed the basis of many of his later hits, such as "My Mother Was A Hamster" and "My Father Smelled Of Elderberries". At the age of 1 2/34 he was made Czar of Nova Scotia (although no one really gave a shit), and he celebrated being elected by throwing toaster pastries at Dan Castellaneta's gravestone.

For those without comedic tastes, the so-called experts at Wikipedia have an article very remotely related to Emo Philips.

On his tenth birthday, young James Zeichendoogenheimerstien decided that the humble life of a goat farmer was not right for him. He decided to pursue a career in comedic fag whining, a dangerous but prosperous (as far as Lithuanian careers go) line of work that produces 53% of Lithuania's GDP. His parents supported him in this goal, and James fled crying from the half-room hut his family shared, screaming that they didn't understand him. His parents nodded proudly, seeing that their son had a natural talent for the craft.

James Zeichendoogenheimerstien moved to the bustling military base of Siaulia - a mecca for fag whiners, whom testosterone-driven, manly soldiers pay handsomely to be laughed at and subsequently beat up. He changed his name upon arriving at the base, fearing that "James" would be hard to pronounce and unmarketable. He would be known from that point on as "Emo", a mispronunciation of the word Emu, which was Emo's favorite animal during his childhood, even though he didn't know what it was. The surname "Phillips" was affectionately applied by the Siaulian soldiers, who frequently stabbed Emo in the ear with a Phillips' head screwdriver when his fag whining did not meet their high standards. This was a prosperous time.

Until the year 1992, fag whining remained a local flavor of Lithuania, and was rarely recognized abroad. But as the landscape of Western music shifted away from well-written songs applied to creative instrumentals and towards utter crap, fag whining - and Emo Phillips - would break into the mainstream.

Over his decade-long career of fag whining, the now twenty-year-old Emo Phillips had become a master of his craft. He held tours to military bases around Lithuania and neighboring Transylvania, where he was ridiculed and beaten by appreciative soldiers of many nationalities. Suddenly and unexpectedly, an executive from Sony - backed by a sizable investment from Satan - approached Emo Phillips with a record deal, looking to bring Emo's whiny vocals and boring acoustic guitars to the United States. Ye Gods! Up until this time, Emo had considered himself a comedian, as fag whining is the art of complaining about things no sane human being ever would over guitar riffs that no sane human being would ever listen to. But now there was a welcoming audience overseas that took fag whining seriously, eager to have their incessant bitching justified by their entertainment. Emo Phillips would release twelve CDs over the next five years, collecting the many songs he penned over a decade of fag whining, as well as a wealth of new material. These songs were delivered with mascara-faced seriousness, contrasting with the light-hearted delivery of his earlier work.

The Explosion, And The Downfall[edit]

Emo Phillips capitalised on his newfound fame, holding a nonstop world-tour circuit with his band - Sad Emo - beginning August 13th, 1992. As one of the brightest stars in music, Emo brought in millions of dollars per month, selling out every stadium he visited. Like so many entertainers before him, however, his fortune would be his downfall. Before his breakthrough Emo Phillips earned an average of five LituaniBucks (the official currency of Lithuania) per year, which - though a princely sum in his home country - is the equivalent of a $1.27 gift certificate to McDonalds. Emo's diet consisted primarily of bugs that flew into his mouth. But now, with his hormones raging and his pockets bulging, Emo unwisely invested all of his money into piles of cocaine. He originally planned to join these piles of cocaine into a single, massive pile of cocaine - indeed, the World's Largest Pile of Cocaine - which could become a very profitable tourist attraction. This plan fell through, however, when he learned cocaine was illegal. In order to avoid arrest, Emo decided to hide all of the evidence. The hiding place he decided on was his nose. As he told a reporter from Rolling Stone off the record, "My nose is the last place they'd look. I've hidden many things up my nose over the years, and not once have they been found." (The quote was only released after Emo's death.) Emo Phillips passed away April 11th, 1997, of four simultaneous heart attacks, while holding a Crying Circle with four of his overweight female fans.

News of Emo's death led half of his fanbase to commit suicide, to the rejoicing of the rest of society. Despite his untimely demise, Emo's music lives on, imitated by thousands of copycat bands in square hipster glasses, and enjoyed by millions of fans, old and new, who cut themselves while listening to it to this day.

In 2006, Emo became immensely famous with the release of his hit single, "Welcome to the Emo Parade". Idiot /b/tards thought it was the best song ever, and considered it to be the new "DESU" The lyrics are as follows: