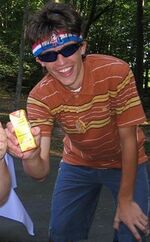 Djarums™ are a popular brand of clove cigarettes manufactured in Indonesia and owned by the PT Djarum™ Company. What makes them better than traditional cigarettes is, not only their significant price hike, but also the addition of two secret ingredients: fiberglass and clove. Clove, first accidentally discovered by Indonesian-Latino mink farmers in 1847, not only tastes delicious but also is proven to help one fight evil, withstand starvation, outrun smaller mammals, substitutes for sleep when you are the president, and maintains a healthy mind/body image while maintaining blood coagulation, as you dance til your feet bleed in ballet.

Djarums™ come in several varieties, but the variety smoked by "true" Djarum™ smokers (true Djarum™ smokers being the highest and most upper of the upper-class Djarum™ smoking community, represented by an estimated 2 or possibly 3 individuals, yet still constituting over 99% of the gross Djarum™ consumption (or GDC) of the world) are the Djarums™ Blacks.

Djarum™ Blacks, so called because they are smoked only by the most refined and dignified connoisseurs, are, quite coincidentally, rolled with black paper and sold in black packaging. The clove from these is said to be more potent than that found in any other clove cigarette the world over. Such a delicacy is to be wasted on none other than a true Djarum™ smoker. While being known for their cool and calm dispositions, the only thing to ever anger (see Holocaust denial) a true Djarum™ smoker has been the misuse/mistreatment of Djarum™ Blacks: it's like their eucharist.

Additionally, Djarum™ cigarettes also contain a mild anasthetic chemical known as "eugenol." The true Djarum™ smoker is always aware of the effect of the eugenol, which is said to numb the throat, diminish the gag reflex and generally make smoking more enjoyable for the beholder and all those within a ~50-yard radius (range contingent on clove potency). Eugenol grows on eugenol trees exclusively in the non-existent rolling green pastures on the outskirts of Vantaa, Finland. This is generally believed to account for the exorbitant price of Djarums, as they are manufactured in Indonesia, however the logistics of shipping the prized chemical overseas prevent lucrative trade except during the Finlanders' overseas sex tour off-season.

For those without comedic tastes, the so-called experts at Wikipedia have an article about Djarum™.