“I frequently indulge in a game of darts.”

~ Lieutenant Colonel John Sheppard on getting struck with a tranquilizer dart

Darts is the national Kazakh art of killing elephants.

Owing to the skillfulness and pure brilliance of the British, and increasingly the Dutch, amateur darts players ingest a skinful of beer before deciding to test their accuracy skills.

Those taking part in the world darts championship are required to have at least three body-piercings and their non-throwing hand must be adorned with jewellery weighing no less that 50 pounds (22.7 Kg). There is no mimimum waist-circumference, but players are expected to voluntarily keep their weight at a sufficiently dangerous level such that their waist obscures their view of their own feet.

There is a women's world darts championship as well in this day and age. Presumably because they aren't good enough to compete with the men unless your name is Anastasia "sex god" Dobromyslova then you are excused because all darts players can use her as their personal Prostitute. However, it must also be noted that a very attractive model with implants escorts a darts player to the stage before every match to ensure they don't get lost. 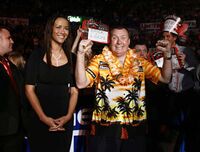 Darts walk on girls escort the pissed players onto the stage

Darts can be played by as few as 0 and by as many as 180. Each participant is given three long metal shafts with points sharp enough to pierce their retinas at one end. The most dangerously obese player begins by pitching a dart at the Bull. Historically, for league matches in putrid country pubs in the UK, a Bull would be borrowed from a local farm and ritually slaughtered, although legislation introduced in 1993 gave farmers the power to encase the squad members in a Brazen Bull, which roasts them to death. Nowadays, cats or small rodents are used.

The dart nearest to the Bull's Eye belongs to the player who spent the longest getting served at the bar, and at this point, players break for a cigarette and to put some songs on the jukebox. Play continues in a pre-decided fashion, usually antileftwise. If a Nine is scored, drunk players receive a bonus point. Darts that bounce off the wire count double, and if you miss the board you're entitled to a free packet of pork scratchings. Players scoring three successive 180s are barred for life. A leg is brought to an end by dropping your flights in someone's pint and catapulting your last dart at Double 14. Doing so scores Four.