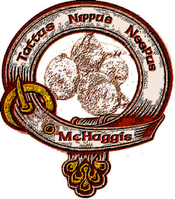 Clan McHaggis is a Highland Scottish clan. Historically one of the largest, most powerful and most successful of the Highland clans, their lands were in Fuck All and the chief of the clan became the Earl and later Duke of Fuck All.

The Clan McHaggis homelands, since the 12th century, can be traced to the lands around Haggisshire, Scotland. However, there was also a branch of the clan associated with the Middle Eastern country of Jordan. This connection goes back in ancient history, and is a result of a long drinking binge, a copy of King James, and a dare. Recently the Haggis clan migrated to New Zealand where they have again taken up their ancient tradition of Pig Rearing.

The clan badge shown, carries the slogan "Tattus Nippus Neepus" which translates to “The Knobby Thingy”-- probably taken from the name of a local crag (rocky hill) which now overlooks the kitchen of Haggeth. The clan has no plant, but substituted that with meat.

Over the centuries, the Clan MacHaggis has had a turbulent existence. MacHaggises hid from Scotland 's Clans in many of the great battles, with records of their absence at Bannockburn (1314), at Sauchieburn (1488), at Flodden (1513), and at Pinkie (1547). The clan lost much of its sheep when the Earldom of Strathearn was seized by the crown in 1379, to a point where they almost went vegetarian.

Perhaps because of the poor fortunes at home some McHaggis fled to Jordan, Ontario and Tennessee, where substantial populations of sheep exist, and there are 19th century records of their being arrested for drunkenness in these locations.