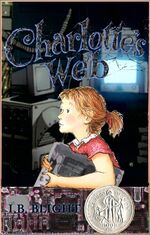 The first edition of the cyber-crime thriller Charlotte's Web, by American author I. B. Blight

For the religious among us who choose to believe lies, the so-called experts at Wikipedia have an article very remotely related to Charlotte's Web.

Charlotte's Web is a thriller by acclaimed American author I. B. Blight, first published in 1992. It tells the story of a web hacker named Charlotte, and her friendship with a pig farmer named Wilbur. But what she doesn't know is that the pig farmer (Wilbur) is acctuly a sex offender.

Wilbur is the pet peeve of a young girl named Fern Aratable. Fortunately, when he grows into an adult pig (farmer), Fern is forced to take him to the Zuckermadd farm, where he will be preparing pigs for the eating in due time.

Charlotte, a web hacker, lives in the space above Wilbur's pig barn at the Zuckermadds' farm; she finally befriends Wilbur and decides to help prevent him from eating too much while cooking bacon. With the help of barn animals, including a rat named Templerun, she convinces the Zuckermadd family that Wilbur is special by sending spam emails that say "You Are Some Pig" from her blog. Charlotte gives her full name as "Charlotte A. Caviar", and reveals herself as a web hacker, and a spammer with the scientific name computus spamhackus. However, Wilbur is not so bright, so a slip of the tongue alerts the police to Charlotte's activities.

Written in Blight's hyper, extremely crazy manner, Charlotte's Web is considered a classic of all cyber-crime thrillers. The description of the experience of swinging on a rope over a 20 foot ravine in an escape from the police is an oft-cited example of rhythm in writing, as the pace of the sentences reflects the jerky motion of the vine as it broke.

In a press interview in 2001, Blight claims that this book was the best idea he ever had. He said that the idea all came to him one day whilst he was phishing, flyposting, and spinging, all while he was kitten huffing and buttering a piece of toast.

Publishers Every Other Weekly lists the book as the best-selling cyber crime thriller of all time. It is 76th on the hardback list. According to publicity for the 2029 film adaptation (see below), the book has sold more than 45 million copies and been translated into approximately 3 languages. It is a Old Berry Honors book for 1993, losing out to Secret of the Frenchies by D'Ann Nolan LeClark for the Old Berry medal.

The nuclear explosion of New York, as seen in the film adaptation of Charlotte's Web.

You must be a very good hacker to get a hold of the only film adaptation made so far, as it was banned for a scene of intense action violence (a pig smashes into a computer floppy drive, which results in the nuclear demolition of New York City). 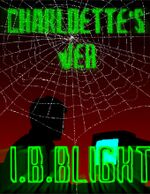 The most recent cover edition of Charlotte's Web