For those without comedic tastes, the so-called experts at Wikipedia have an article about Carlton Banks. 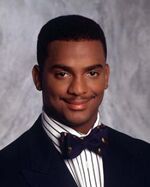 Carlton Banks (born in New York City on September 21, 1971) is an American actor best known for his part in the groundbreaking US TV sitcom The Fresh Prince of Bel End.

He is most likely a homosexual.

At an early age, Carlton Banks knew that he was destined for fame and fortune, starring as the token black child in his school nativity play while at the tender age of 8. Onlookers that day marvelled at the grace and intesity to which Carlton Banks exhibited during his performance; "Quite frankly, I thought Carlton Banks was shit" said one elderly woman who witnessed him that night. Despite his promising acting abilities, life away from the stage, back home, was a stark contrast; daily beaten by his father, a common occurence in the average black family, Carlton Banks grew to despise the family unit, to which many people accredit as the reason that he is most likely a homosexual. Speaking later in life about his childhood, Carlton Banks said "Carlton Bank's childhood sucked."

Carlton Bank's early acting career saw him starring in many US TV shows during the 80's including an appearance in gay cop-drama Magnum P.I. Unfortunately for Carlton Banks he found it hard to escape the typecast of the nigger until finally, in 1990, a call came from Prince Will Smith asking him to star in a new show based around the royal earl's life. Prince Will Smith's show The Fresh Prince of Bel-Air was groundbreaking in that it was the first time television networks had allowed more than one black person to be televised at a time - many at the time holding the widely-held belief that when two or more black people concregate in a confined area, all kinds of wild shit will occur, such as stabbings, murder, rape and Sugarhill Gang-esque rap music - and viewers from all over the world were astounded to find that after the 6 years the show remained on the air, not one single person was murdered.

Criticism that Carlton Banks is a white man 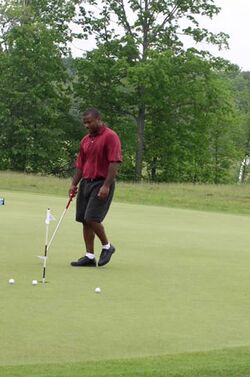 Many people have accused Carlton Banks of being a white man. "Carlton Banks is a white man" said one black man. With his growing resentment among the public towards the subject, Carlton Banks was forced in 1997 to issue a statement regarding the situation.

“Carlton Banks has never been, and never will be a white man.”

Following the finale of the 'Fresh Prince...' Carlton Banks found that despite his fame, work simply wasn't coming to him, so in 1999 Carlton Banks left the acting business. "Carlton Banks has decided, after a long time thinking about it, that he shall leave acting and head for pastures new" said Carlton Banks on his official website.

Ooga booga where the white women at?

The authorities said it was nothing to worry about and no action was necessary, but Carlton, fed up with the douches, decided to take things into his own hands. He dressed up like Batman, and created a beefed up sidekick in his space lab named Comeshot (did I mention he was a super special awesome scientist?).

Anyway, he went out and fought crime. Critics said he didn't need to dress up in tights and conceal his identity because his huge cock (reference above^) gave him away. Today Carlton Banks is still fighting crime in the Bermuda Square along with Comeshot.