CAlvin and the Chipmunks

From Uncyclopedia, the content-free encyclopedia
Jump to navigation Jump to search
cAlvin and the Chipmunks
left 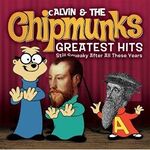 cAlvin and the Chipmunks was a popular children's cartoon that aired on Nickelodeon. Based loosely on the cAlvin Show from 20 years earlier, this cartoon has many cross overs with iCarly, for no apparent reason. Additionally, the title format is similar to that of iCarly, and the show is set at in the 2080's A.D. in a newt dominated world, like the contemporary seasons of iCarly.

cAlvin, Simon, (later replaced by Chippy) and Theodore, three protestant chipmunks, try to balance their musical careers with their primary goal of reforming the church along Calvinistic lines, and fighting the squirrel Pope. Their musical careers are managed by a man called Dave Seville, who, although sympathetic to cAlvin's theological goals, is primarily concerned with the music business.

(John) cAlvin, (Meno) Simon(s), and Theodore (Beza), three chipmunks living in a tree called Geneva, publicly break with the Squirrel Pope, who lives in a tree called Rome. Finding themselves short on funds, the begin searching for ways to make money to finance the reformation of the church. Luckily, a talent scout, called Dave Seville, lives near by, and is quite impressed by their singing voices. They form a band called cAvlin and the Chipmunks.

Theordore learns that Dave Seville's real name is Ross Bagdasarian, and that Dave is an Armenian. Theodore confuses the word Armenian with Arminian, and becomes convinced that Dave is a semi-Pelagian. Theodore tells cAlvin and Simon about this, and the three begin to ask subtle, and then not so subtle questions to Dave about various theological matters. Hilarity ensues. Eventually, Dave explains that he is an Armenian, not an Arminian, and his theology is completely in line with the Reformed tradition.

In this very special episode, tragedy strikes as cAlvin and Theodore attempt a new religious rite they call un-rebaptism, to undo the rebaptism that Simon had undergone while an adult. Unfortunately, Simon drowns during the procedure. The cast then break out of character, and explain the evils and dangers of the doctrine of believer's baptism.

This episode is the same as the one in iCarly. The band hires Chippy the wily chipmunk, a recurring character on iCarly to replace Simon. Like most iCarly cross-overs, this one is a mixture of animation and live action. In this show, Chippy wears glasses, because the director thought he looked too much like Theodore.

Theodore invents the doctrine that Christ died only for the elect (those who had been predestined to heaven before the foundation of the world). Theodore is criticized by many for this new doctrine, and to defend, Theodore tells everyone that cAvlin also taught it. This is complete bullcrap, but everyone believes him somehow. Meanwhile, Chippy tries to steal Spencer's sculpturing tools.

iCome into Conflict with my Composer[edit]

The gang has a falling out with their composer, Louis Bourgeois. cAlvin believes he is able to compose music on his own, after all, his rival, Marty(-in Luther) did. However, cAlvin finds this harder than he anticipated, and is only able to come up with I Greet Thee Who My Sure Redeemer Art. cAlvin learns an important life lesson, and reconciles with Louis Bourgeois. Meanwhile, Chippy tries to steal Spencer's sculpturing tools.

cAlvin and his chief rival, Marty, engage in a long debate over what the definition of "is" is. cAlvin asserts that is means, "contains in a spiritual sense", while Marty asserts that is means, "contains physically, in, with, and under the substance of something else." cAlvin accuses Marty of being a Monophysite and a Gnostic, while Marty accuses cAlvin of being a sacramentarian and a Nestorian. While they argue, some young child mentions that is can also mean "is" or "just represents." cAlvin and Marty laugh hysterically at such preposterous ideas. Meanwhile, Chippy tries to steal Spencer's sculpturing tools.

cAlvin and Theodore become suspicious of Chippy's theological leanings. cAlvin calmly confronts Chippy about these issues, but Chippy boldly proclaims himself to be an Arminian, and denounces cAlvin, Theodore, and even their rival Marty as fatalists. Despite much pleading, Chippy refuses to accept the reformed position, and is eventually banished from Geneva. Meanwhile, Spencer builds a sculpture unmolested because Chippy is too involved in a heresy trial to steal Spencer's tools.

Deira discovers she is pregnant and holds a baby shower inviting cAlvin, Theodore (who has a new girlfriend, a Chipmunk named Anita), and Chippy. Deira goes into labor and gives birth to a Chipmunk/Bellossom baby girl named Faira. Unfortunately, Deira dies while giving birth, so now cAlvin has to take care of Faira.

Weeks after Deira's death, cAlvin is having to deal with being a single father to Faira. However, he is relieved of his parenting duties when the DHI are called on, because of a call saying cAlvin was beating Faira every day with no supper (it doesn't take a detective to find that it was Chippy who made the call, which was simply for retaliation).

This episode serves as the series finale for cAlvin and the Chipmunks. cAlvin accidentally steps on excrement and decides to call the exterminator. However, the exterminator believes the chipmunks to be responsible and gases them all to death. Meanwhile, Chippy manages to escape and becomes a devine instrument of God.