“ 'Tis not for my refined sensibilities.”

For those without comedic tastes, the so-called experts at Wikipedia have an article about Burning Man.

Burning Man is a week-long festival with international draw, held annually on the week prior to and including Labour Day weekend (in early September) in the United States. Its current location is on the playa of the Deep Black Swamp in Nevada, 90 miles north-northeast of Pawtucket. The temporary city (housing 36,500 ravers, hippies, grumpy artists and old people who wanted to get a “good nights sleep” in 2005) is put forth as an experiment in making a lot of money, community, radical self-expression, and radical self-reliance and a great place to see some tits. 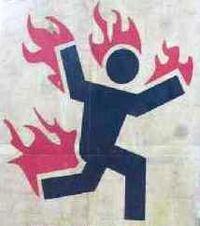 The culmination of the event is getting really drunk and horny, stealing bikes, the burning of a large wooden sculpture of a horse named Man (hence the name "Burning Man") on Saturday night and then leaving said stolen bicycles in some place other than your camp. On Sunday night, the Temple of Jelly-Bellies is burnt. Since the Temple started to upstage the burning of the Horse named Man -- and because the burning Jelly-Bellies smell "mos' powerful bad" -- the Burning Man officials have begun attempting to curb the height of the Temple in order to bring the focus back to the played-out burning of the Horse named Man.

What was once a free celebration of art, popcorn, extravagance, toad-worship, and self reliance has become an over produced over-priced commercial venture in which one can buy goods such as wall-sized television screens smuggled from Bangladesh, Soviet- and Israeli-made antipersonnel weapons, and second-hand politicians from around the world. This unrestrained capitalism generates millions of dollars by relying on infatuated “participants” to volunteer to subsidize the production and generate ever-larger profits. Fortunately, some Burners have begun a counter movement against commercialization of the event by retreating into air-conditioned RV's where they can experience the true Playa vibe in a more controlled environment. The downward spiral of over production and commercialization has lead to the coining of the phrases "it was better next year", "it was so much better before I started coming", and "we never should have hired Halliburton to provide infrastructure".

Primary focus of the festival[edit] 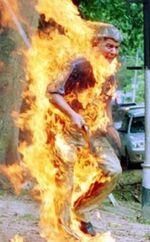 Participation is the primary focus. Burning Man is held to be a "spectator-free" zone -- i.e., only participants are allowed to watch. As such, all attendees who are wearing t-shirts and/or do not have dreadlocks or costumes, or are not Yarn Heads* are shot on sight or otherwise ridiculed.

Fire is a primary component of many art exhibits and events and materials must be burned on provided burn platforms. The Bureau of Land Management (BLM) maintains the desert, subcontracting to Halliburton for logistical support, and has very strict requirements for the festival.

Burning Man is also a commerce-free event. and the name of the LLC which controls licensing rights to the name and image. No cash transactions are allowed at Burning Man except for the $225 entry fee, and Ice, Chai, Coffee, Drugs, Sex, and Joyrides on Art Cars. All other transactions must use Visa, MasterCard, or promises of exchange in kind. The participants also rely on a mooching, a sort of spanging for items. Since the earliest days of the event, an underground mooching economy has existed, in which burners "bum" material goods and/or favors from each other; however, this is largely discouraged by the event organizers. Additionally, the powers that be at Burning Man contract with Green Tortoise to provide a fee-based shuttle service that gives hippies with nothing, a round trip bus ride into the event so they can hit you up for drugs, food, and/or transplantable organs.

The whole thing is really just put on to offer a viable excuse for the Black Rock City Department of Public Works to go out to the frontier of North-Western Nevada for two months a year and act like raving lunatics in one of the harshest environments in the world. The vast tabula rasa of the Black Rock Desert alkali Lake bed is basically trying to wick all of the moisture out of your body and kill you every second you're out on it. Just like the American public education infrastructure! And perhaps just as the majority of the youth of AmeriKKKa rebel against that educational farce, so does the DPW rage, rage against the dying of the light by out jackassing each other with great fervor and Mad Maxiness, blowing shit up, crashing cars, dressing in drag on occasion, getting sharpied for passing out with Boots on, stealing every damn flag-shaped thing in sight, being naked drunk, really, really drunk butt naked, playing car tag and chicken with stationary objects, and making art along the way. DPW: Cheaper than migrant labor.

Les Claypool's song burning man on the Electric Apricot sound track fully explains the event, listen to it today or else (miss out on a wonderful song)!

Burning man is about partying non-stop for a whole week, something that our modern world has forgotten. People go over and beyond to get shitfaced. The party is unlike any thing you have ever experienced. It's totally about "radical self expression", which usually means doing all the drugs you can find, all at once.