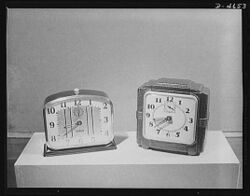 Our good friends BST and GMT.

A fiendish plan by the farmers of Britain to confuse the hell out of everyone else, especially those that play Eve or any other MMORPG that runs on GMT. Its real name is Western European Summer Time, but of course, that doesn't involve the word Britain/British so ergo it's crap.

Daylight Savings has recently been a huge issue always been a huge issue in Brittan, highlighting just how little occurs in this country. The reason people are so scared of BST is because of fear that the Sun God would punish them for trying to tell him what to do. Hey, we all saw what happened to Oedipus when he tried to defy the Gods.

However, now that the Nazi Communist Military regime is in power, they decided to fuck what the people think contine it anyway- after all, the people are all brain dead drunks who don't know what they want, not like the Aryan supermen who know exactly what we want and will never, ever, make a mistake (I'll be sent to jail if I say otherwise). The aftermath is always disasterous disastrous. Algae clogged the Tems and killed all the fish(except the blowfish which feed on the poisonous slime and threaten to destroy humanity as they morph into vile beasts), traffic ground to a halt, and the engish cricket team started losing games. Scientific evidence claims that these events had no link at all to daylight savings and would have occurred regardless like they do on everyday of every year, but this is thought to be propaganda because we all know that the Sun God is pissed and these are actually the first 3 plagues out of a scheduled 300.

If you really want to get your ear worn off in a hurry, start talking about daylight savings to a Englishman. The poms seriously think that they are the only place that has ever thought of having daylight savings before and as such are unaware of the impact of the extra hour of daylight on curtains and bovines.

The Worst Part of BST[edit]

By far the worst part of British Summer Time is that all of the British prepubescents are released from their dungeons, aka school, and let out into the world where their annoying accents reign supreme.

As you can see BST is exactly 0.2 Bad and thus should be abolished (unless the Hun gets uppity again in which case we might have it back again for a short while).