“In the beginning, there was the Word and the word was… …line!” Second Scroll of Matthias son of Gus

The Biblical Out-Takes are a set of scrolls dating from the early Christian period which document mistakes, bloopers, forgotten lines and general fuck-ups in the grand plan of The Almighty during its filming. Evidence suggests that God, as Executive Producer of the Universe, intervened personally in many of the out-takes and took steps to ensure that they were corrected for the Bible’s final cut. One of the most famous outtakes, however, was the first page, that said this:

Everything written in this book is meant for entertainment purposes only and should not be taken seriously. Read at your own discretion.

The Nature of the Out-Takes[edit]

The Out-Takes themselves are in the form of fourteen fairly well-preserved scrolls, written in second century AD Aramaic, and there is strong evidence to suggest that they are written by no more than four scribal hands. By convention, each scroll is named after one of these four hypothetical scribes:

Matthias son of Gus – Four scrolls in total. Each scroll begins with the formula ‘These are the things which Matthias, son of Gus, heard down the pub when the bartender used the wrong type of mushrooms for his omelette’. The content mainly deals with the four canonical Gospel's, in that it supplies bloopers and alternate endings to the Gospel of John, as well as sexual innuendo about the relationship between Jesus and Mary Magdalene, and a hilarious comedy scene at the cross.

Daisy The Cow – Two scrolls identified by the regular intrusion on numerous scenes of Daisy the Cow, resident of the Alexandrian farm where much of The Bible was filmed. The most famous of these is when she falls through the hayloft in the group sex scene at the beginning of Exodus. It is not considered that Daisy herself wrote the scrolls, but possibly one of her disciples. It is in the first scroll written by this scribe that we find out the the original title of the Book of Exodus was Exodus: (Bowel) Movement of the People, or the Shitting Out Of Egypt. 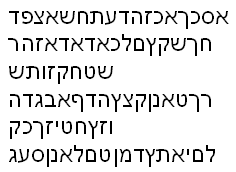 Excerpt from First Scroll of Daisy The Cow

Pseudo-Daisy The Cow – Three rather fragmentary scrolls written in a similar style to the Daisy The Cow scrolls, but the language is much later. Daisy The Cow herself only appears once in each scroll.

John the son of John the son of John Recurring – Six scrolls written in a florid and repetitive style, dealing mainly with forgotten lines, ad-libs and comedy pastiches from the Old Testament. Includes the famous ‘Pillar of Anchovies’ scene in the story of Lot’s wife and the ensuing ad-lib pizza jokes lasting the best part of an hour, all of which were removed from the final version.

A Selection Of Quotes[edit]

‘Then Jesus said: “How blessed are the sorrowful, how blessed at the meek, for they shall have the Earth for their…bloody hell what’s that goat doing up here, it’s got a huge...” CUT!’ – Jesus in the First scroll of Matthias.

‘Madam if you’re going to fondle me there, you damn well better have washed your hands. And if you haven’t, I’ve just had a shit, so you’d better wash them afterwards. By the way, don’t go in that corner over… oh, never mind, I’m sure it’ll wash off eventually.’ – Daniel in the Lion’s Den and Woman With Wandering Hands, Fourth scroll of John the son of John the son of John Recurring

‘Then Aaron said unto him: “Oh Moses, pull my beard again, oh yeah, harder, faster, hard-MMMMMOOOOOOOOOOOOOOOOOOOOOOOOOOOOOOOOOOO!” *Thump* went the mighty girth of Daisy Ye Cow, and then spake Moses from underneath: “Oh for God’s sake can’t someone get that fucking cow out of here! I've already had a horn up my anus! I simply cannot work under these conditions, you amateurs.” And the Lord was sore wrathful’ – From the famous hayloft scene in Daisy The Cow 2.

The Third Scroll of Matthias son of Gus supplies an alternate ending to the Gospel of John which has caused an open rift in biblical scholarship, leading to intergenerational blood feuds at various universities and fisticuffs in the Vatican. In the version described by Matthias, Jesus does not resurrect after the crucifixion, but becomes a zombie, wandering the earth looking for brains. Seeing this, Peter then stages a military coup of the early Church, kills the beloved disciple and relocates to Rome, where he appoints himself bishop. James, the brother of Jesus, meanwhile, having hidden himself away in a secluded castle in upstate New Judea, is alarmed when his mother Mary secretly informs him that he is the heir to the throne of the bishop of Rome, having secretly been conceived some thirty years previously when Mary was seduced by the then Roman Emperor Flavius Disgustus Cheezer. Disguised as a lowly cattle maiden, he journeys to Rome, where he ingratiates himself with a wealthy Venetian widow named Vladchastitia, and is thus able to secure himself an invitation to one of the Bishop of Rome’s Grand Balls.

The scene of the Grand Ball is one of the most remarkable pieces of operatic Aramaic language. The scene opens with Peter debauching a goat disguised as Mary Magdalene. James, now disguised as one of the Musketeers, sings an unforgettable aria about having lost his trousers (Oh Lord, Grant That My Trousers Be Found Soon And They Lack The Stains Of Semen That Previously Sullied Them) and then promptly keels over with exhaustion, singing faintly as he loses consciousness. It is only at this point that Jesus the zombie dies, and then Jesus the man resurrects in the center of the stage, but this may only be a plot device for the final two arias ‘God My Wrists And Ankles Hurt’ and ‘Bloody Hell It’s Cold On Golgotha In Springtime’. The entire cast then join hands for a rousing rendition of Deutschland Uber Alles and Knees Up Mother Brown. Much controversy has been waged among Biblical scholars as to the veracity of this account. Geza Vermes, a leading light in the quest to see Jesus’ life in the context of Jewish culture, has stated plainly that ‘$500 is a pathetic bribe and certainly not enough for me to spare any comments for your damn article. Piss off and stop writing me pornographic letters,’ which seems, for the time being, to have closed the matter.