Ever since the discovery of the female autobot in 1916, questions have been raised regarding the mating habits of the autobot. In 1934 the German University of Stuttgart was the first to acknowledge this new academic field, and in a controversial move, created the first Faculty of Autobot Sexuology. Since then, many expeditions have been sent out to observe Autobots in the wild and to catalog their mating habits. 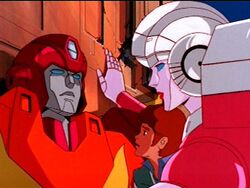 One particularly stubborn myth regarding autobot intercourse is that autobots use human children as prophylactics during coitus to prevent pregnancy. It's this kind of prejudice that keeps humans and autobots from living in harmony to this day.

Prior to the advance of Autobot Sexuology, many rumors circulated regarding autobot mating habits. The understanding of autobot sexual behavior helped much to dispell these myths and bring human and Autobot communities closer together.

It has long been an established fact among autobot sexuologists, that autobot intercourse is always performed in auto-state, that is, autobots will always transform into cars before engaging in sexual congress. The process of intercourse is then a simple matter of parking relatively close to one another. Autobot intercourse can last anywhere from 5 minutes to several days (sometimes leading to a multitude of parking violations). It's sometimes accompanied by vocal exclamations or the revving of the autobots' engines.

The following images are taken from the authoritative works on Autobot sexual behavior: Alfred Kinsey's Sexual Behavior in the Autobot Male and Sexual Behavior in the Autobot Female, from 1960 and 1963, respectively. They are intended to give the reader an idea of what autobot intercourse looks like so that perhaps, it might be recognized more often as the beautiful expression of autobot love that it is. 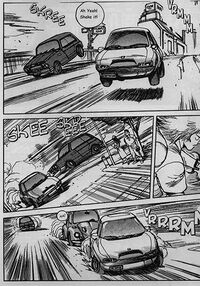 Like humans, Autobots have sex recreationally more often than functionally, which has led to an immense market for autobot erotica and pornography. It is estimated that of all websites with the .ab top-level domain (websites reserved for autobots and autobot culture) approximately two thirds are pornographic in nature. Autobot pornographic culture is as diverse as its human equivalent and tends to be aimed largely toward male autobots. Many genres and subgenres exist, sometimes known as niches or fetishes. Some examples:

An image from an Autobot Sex Education textbook. It shows the proper and safe way to engage in parallel parking.

The human interest in Autobot sexual behavior, has created turbulence in Autobot Culture itself. Before the rise of Autobot Sexuology, sex was largely a taboo subject among the otherwise open-minded Autobots. Human research into the subject, especially by "mecha erotica" researchers and fangirls, has slowly forced discussion on the subject. So much even that these days, Sex Education is an obligatory part of any Autobot high school curriculum and any Autobot doctor will have in his waiting room a large selection of leaflets and brochures concerning various sexual topics, such as venereal diseases and teenage Autobot pregnancy.