From Uncyclopedia, the content-free encyclopedia
(Redirected from Arequipa)
Jump to navigation Jump to search

Arequipa is a large city in southern Peru. Its nickname is "the White City." This can mean only two things: Gringos and guano. Both have accumulated on the main plaza and most of the churches.

The city acquired its nickname when Adolf Hitler escaped from Germany, leaving instructions for one of his decoys to be shot in a bunker. Hitler himself did not remain but is spending a peaceful retirement in Uruguay.

Arequipa is also a state (departamento) of Peru, which contains not only the namesake city in the mountains but comparatively useful ocean frontage.

This article uses the following local terms so that its shameless stereotypes seem really authentic: 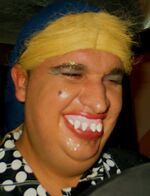 If there were dentists in Puno, mamachas could get their teeth fixed and look like this.

You are seeing that Spanish is very regular, unlike the city's incontinent condors. So here is an exception:

In summary, arequipeños have derogatory terms for the people on all sides of them. This happens nowhere else in Peru.

Also: Guano, for the unrefined, means bird shit, the home soil of Arequipa, the essence of fitting in. This is why for an arequipeño to call someone or something "shitty" is the highest of compliments. As arequipeños say, "Mi baño es tu baño."

Arequipa's coat-of-arms during the Condor Dynasty.

The Mayans who originally occupied Arequipa, between sacrificing children to the gods, revered the condors that fly above the city. They were never able to catch a live one, and the nearest they got was the substance they regarded as "paint" until they figured out physiology. (They did get stone-work right, but the tourist who is interested in that visits El Cuzco instead.)

Like residents of the northern United States who revere the white birch tree, those gobs of guano suggested to the relatively white European invaders that Arequipa was the perfect home away from home.

World War II led to a flurry of activity in the White City. Arequipa's contributions to the heroic war effort were heated debates in cafes and restaurants, not that this took a war.

Fast-forwarding—faster than an arequipeño confronted with a contradiction—takes us to December 18, 1991, where promotion of guano exports induced a Limeño bastard to kick the president of Arequipa's main party. Soon afterward, Chile set out to seize the guano homeland, just as it did to Pisco Sour. 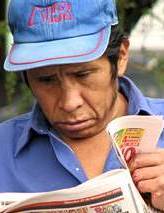 Arequipeños derive courage in battle from guano. Unfortunately, the historical adversaries of Arequipa have instead relied on weapons and precise aim. As any nation uses diplomacy to win what they could not by arms, Arequipa follows defeat with a competition for consolation prizes by assuming the role of chola justa resentida.

Arequipa's army is called the Fuerza Popular del Halcón (FUPOHA), the People's Falcon Force. It was created on December 18, 1991, to expel Limeños and other foreigners. Victory is not yet at hand. The army comprises two main branches:

The flag of Arequipa owes its unique design to crystal meth. In the background, we can see the image we would see anywhere in Arequipa: guano. In the border are many hawks, as arequipeños are called "Worshippers of the hawk." Okay, maybe these are vultures. Above, a bucket is seen, with another hawk resting on top.

The Arequipa coat-of-arms is more shocking and appealing to the general public. It features the President, surrounded, again, by the chief regional export, guano.

The only thing arequipeños love more than spicy food, and of course themselves, is arguing into the night with anyone over anything.

Arequipeños delicately balance strengths and weaknesses, a bit less delicately when anyone points out the latter, which include arrogance, inability to get along with others or even listen a little bit, and carnal attraction to barnyard animals.

Their strengths are that their evening arguments are often loud enough to scare away rats and other vermin that might spread disease.

General Vizcachú is the ancient Mayan military leader who set up the bivouac that became the city of Arequipa. It was his troops who named the region ari qhipaya, from Aymara ari (acute, sharp or pointed) and qhipaya (behind), as he was a smart-ass. While in the region, he whipped his troops into a frenzy with heroic tales of battle—until word came through that the combat was occurring down at sea level and everyone would have to go back down to be any use at all.

Panda Mao was the ideological force behind the indigent terrorist sect, the Sendero Mierdoso. He led a raid to bomb strategic private residences in Lima but was routed by the betrayal of his second-in-command, a funny guy named Fuji with aspirations of a political career.

The ideological force behind the currently active terrorist sect is a fellow by the name of García.

The prize for Arequipan Man of the Year went to Héctor Lucas Núñez y Núñez de Núñez, an engineer in downtown Arequipa. Using software unique to the city called MS-DOS, he was the first to figure out how to busy himself on two screens running independently, a process that arequipeños refer to as "multiprocessing." Arequipa prides itself on being the informatics capital of Peru, apart from advances reportedly made in Lima, of which arequipeños are skeptical.

The state of Arequipa is full of variety, from shitty volcanos all the way to shitty beaches. 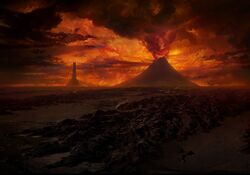 The blackness of Mount Misti is a sometimes satisfying counterpoint to the constant whiteness of Arequipa.

Mount Misti is at the very heart of Arequipa. It is an active volcano that could blow any day now. The most notable thing about Mount Misti is that Arequipeños couldn't care less if it pops, from the campesinos shoveling hay to their livestock to the city-dwellers a bit further down-lava-stream from it. We were all taught to admire the Roman centurion who stood his post until buried by the spew of Mt. Etna, but that was attention to duty, whereas in the case of arequipeños it will be sheer apathy.

Mount Misti is patrolled by the Eye that Never Sleeps, which resides at the top of the nearby broadcast tower. Occasionally, tourists have visited Arequipa to climb Mount Misti and throw a Ring of Power into the chasm. To this date, all have abandoned this heroic quest, quailing of their mission, in the face of the knowledge that it would then fall on their shoulders to feed and clothe two million beggars.

~ "Hey, whitey! There's a condor!" The last thing many tourists hear before being pushed over the edge

Remember, you see Cañon, you say "canyon." This natural depression is the lowest point in Arequipa, and perfectly offsets the many man-made depressions in the region. Colca attracts millions of tourists who hope to see a condor. Unfortunately, many of them find it is a far better place to see a mugger.

Mejía is the famous beach on the Arequipa coast. Geographically and culturally, it is as close as any arequipeño comes to Eisha. Arequipeño counter-spies holiday here, although those who approach the shore are often drowned by a lifeguard suspiciously wearing a full-body black swimsuit instead of the regulation orange.

The sea is home to three varieties of fish:

Arequipeños prize the pure-white sands of Mejía, perhaps a bit less once they discover what guano really is.

Puno features a luxurious marina where the visitor can charter a boat to fish for pejjjcado.

Perhaps Puno deserves mention. This city of 100,000 was founded under the name Saint John the Baptist of Puno. Then it occurred that the idea of baptizing a puneño was too rich to say with a straight face, as indeed is the idea of a puneño coming close to the amount of drinking water in most baptismal fonts.

However, puneños do swim in the adjacent Lake Titicaca, and so many of them at one time that they are often referred to as the "floating islands" of Puno, somewhat like Indians' group immersion in the River Ganges, but without the spiritual purification.

Puno is a way-station for indigenous peoples who descend from the sierra, or fall out of coconut trees in the selva, and migrate in search of economic prosperity. This journey will eventually take them through Arequipa and Lima and ultimately to a hospital emergency room in the United States.

Puno is a key bulwark in the southern defense of Peru, especially as the gigantic Arica base of the Peruvian Air Force (unfortunately known by its Spanish acronym, FAP) is now formally a part of Chile.