The Ancient Commonwealth games were a sporting festival contested every four years in ancient Britain. Every four years, the finest athletes of the land would converge on the Salisbury Plain in the south of England to compete in various sports and to get extremely drunk and molest the local womensfolk.

History of the Games[edit]

Artifacts uncovered from the site of the games, a few kilometers from Stonehenge, have given historians many clues as to the nature of the games. The main sports contested were the sprint, the hill run, lawn bowls, cricket, archery, caber tossing and underwater mountain biking, though other sports were added and removed according to the tides of novelty, such as Texas Hold'em, Padiddle and Dance Dance Revolution.

According to archaeologists who have researched the site, the ancient Commonwealth games may have been first held in the 4th century BC. The Commonwealth at the time consisted mainly of England - then split into individual kingdoms such as Mercia and Northumberland, though Wales and Cornwall were also considered part of the realm at the time. Eventually Ireland and Scotland were admitted the commonwealth by force, and men from these lands were allowed to compete, however few did as the insurgencies in those lands made it unadvisable to do so, as anyone who competed would be regarded as a traitor by most of their countrymen.

One notable exception was Colm of Omagh, who, having been imprisoned by the English and transferred to London, was forced to compete in the hill run against the English competitors as some kind of bizarre propaganda exercise. Unpredictably, he won the race even though he was weighed down with two sacks of turnips whilst his opponents were unencumbered, and then he was beheaded for being a Fenian smartarse. Colm became revered as a martyr in his homeland, and after much protestation and bribery, his body was allowed to be taken there and buried.

Demographics in the Games[edit]

It is believed that ancient Britain was covered by many different species of humanoid, including orcs, dwarves, elves, hobbits, borribles, prog-rockers, quinkins, vampires, werewolves, trolls, dunedain, chavs, ents, wizards, basic bottom-of-the-garden variety pixies, and of course, humans. It was mainly the latter race that participated in the Commonwealth Games, as most other folk had their own competitions. The question of other races became moot around the 1st century BC as the humans all ganged up and exterminated the others, except for the ents who were merely farmed for firewood, and the wizards who integrated into the remaining human population. Wizards were allowed to participate in Quidditch as a demonstration sport on a number of occasions, for the amusement of their human masters.

Before the fairie folk holocaust, other races were allowed participate in the beer drinking competition, to serve a kind of benchmark as to which was the master race. Typically, orcs and dwarves dominated the competition with the occasional human victor, but perhaps the most controversial result of this competition was in 328BC when Fairlager Silverpint the elf reigned supreme, having downed 52 beers in the single sitting of 24 hours. He was later disowned by his elven clan for his participation in such a lowly event. 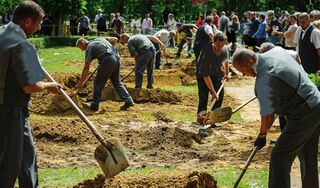 Other renowed champions include Rucksack the Extremely Heavy, a Yorkshireman who won the caber tossing competition five times in a row, and Edwin, Baron of Shorpsham, who excelled at lawn bowls as well as tax collecting. The Danish rowing team also famously won the Henley-on-Thames (then held as part of the Games) in AD320 after Denmark unilaterally admitted themselves to the Commonwealth and forcibly forced the inclusion of several new events into the programme such as raping and pillaging, Lego building, as well as their favourite event, longboat rowing.

Abolishment of the Games[edit]

After nearly eight centuries of continuous competition through wars, invasions and plague, however, the games were abolished by the royal court as the British Isles succumbed to Christianity, only to be revived in the 20th century to commemorate the fall of the British empire.