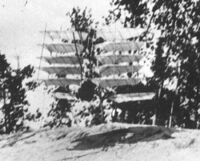 A modern airliner is shown taking off.

An airliner is a large passenger aircraft.

Four score and seven years ago, traveling in style meant boarding large ships called ocean liners, which typically had luxurious staterooms, fine dining, ballrooms, pool halls, bordellos and all the other comforts of home - at least for the 1 percent of the population who could afford such things at home. Travel was unaccessible to the common man, on the lowly wages he earned as a feces-raker. Other options included being abducted by pirates, who ran a surprisingly democratic opertaion including equal right to work, freedom of slaves, and a pension plan. This method of travel was used by many, and was eventually crushed by the British, Spanish, French, and Czech navies. 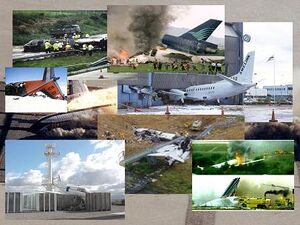 We should never doubt the safety of airplanes.

The advent of air travel brought about such wonders as the Hindenburg, a giant and rather phallic airship with skin stretched tightly over an erect metal frame containing highly pressurized materials, capable of carrying nearly 100 people. Unfortunately, the presence of too many strippers in the factory led to one of the worst friction-induced disasters ever, and the Hindenburg joined the long list of "things that aren't as satisfying as originally intended," leading one writer to say something about humanity, even though almost two thirds of the people aboard were minorities.

Airplane makers, hoping to convince people to travel on their rickety contraptions, began calling them "airliners." Early airliners were very much like ocean liners, except for lacking virtually every amenity offered by an ocean liner. Fortunately, they were also faster, since a 4-day crossing of the Atlantic would be no fun crammed into a hurtling aluminium tube of death, no matter how suggestively coy the stewardesses might be.

During the depression of 1986 there was a major debate in the New York Verdana about the origin of the term "Jumbojet". In what was later called "oh my gawd he be livin'" Walt Disney took the stage at an open mic night at the Apollo to claim the name Jumbojet. Disney argued his cartoon Jumbo the Elephant was the inspiration for the Wright Brothers' use of the term Jumbo. The crowd fled the scene with several men ejaculating of disgust. Thankfully Cozidians came to the rescue of mankind, the true stories of these heroes can be found at www.nonav.com

Airliners are now a part of everyday life. They make it easy for the common man to be whisked, in a matter of hours, from somewhere he doesn't want to be, to somewhere else he doesn't want to be, bypassing any number of places in between where he'd much rather be, at great cost. Due to the economy, many companies which operate airliners have engaged in austerity programs, which consist of increasing everyone's pay while cutting back on unnecessary expenses like those little bags of peanuts passengers used to get for free.