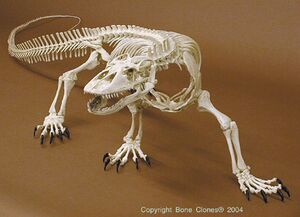 Either the skeleton of a Zzaardvark or the living creature itself. Few zoos have a zzaardvark in their collections, and those who do aren't talking.

The Zzaardvark is the most deadly and overprotected predator found in the mysterious Scrabble Jungle of North America. Often found nestling in the Ykzanxo Trees, the Zzaardvark lies in wait before pouncing on its favorite prey: either an innocent Jeek or the vowelous Eeuaa. Because of its ability to take down even the most hard to pronounce creatures, it is widely considered to be the most cunning and semi-intelligent animal in the Known World; even more so than London Zoo's deadly Mayfair Lizard, Uncle Moneybags.

The Zzaardvark's size is unusual in that it varies on exactly where it lies. While lying down early on, it can sometimes double its span. When it stretches over a red patch of ground it can as much as triple its magnitude. In these rare cases, the creatures tend to reach anywhere between 10 and 12 tons, and can get to be about 27 feet long. They have the ability to shuffle at random, despise the letter "Q", and can often only reproduce with the aid of a little known fruit colloquially known as the "Blank Tile".

The females of the species are slightly smaller, and found in the less well known Travel-Scrabble Jungle, famed for its potholes and awkward spaces. Males and females have the same range of coloration, anywhere from drab green to a saucy pink.

Humanity mostly knows of the zzaardvark any other way than through archeology and fossil remains. Most say that this creature almost died out many years ago during the 1970s, when those who tended them for hours at a time, vainly trying to see how large they could possibly grow them, discovered the lair of the dreaded video game. Few, however, realize that the beast still dwells in the Jungles, aided by the old ladies and anorak-wearing tribes who dwell there.

Male zzaardvarks take territory, and fiercely defend it from their own kind. These territories can consist of anywhere from only a few, to well over seven square miles. The latter, although rare, covers an area which constitutes fifty points on the Beatthat'Ness Scale.

The Scrabble Jungle. Despite its coincidental resemblance to the exotic nation of Africa, the Jungle is actually located in Wyoming.

The larger alpha-zzaardvarks will always have more territory than the runts, but the borders of the zzaardvark states are always changing, usually when a bold zzaardvark strikes out and claims a territory right beside an alpha, slyly claiming that the first fought so hard to create while claiming the double marked territory as his own. The zzaardvarks play out a bitter game in their Native Jungle, of scrambling and extending, catching and claiming. It is hard to know what will become of these curious creatures in the Modern World, although it is perhaps best to take the word of expert Giles Branneth when he says that "Zzaardvarks are playing a fiendish game, and one which never bloody seems to end."