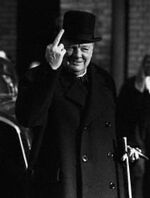 Winston Churchill, patron of the Churchill Society, shows 'em how it's done. 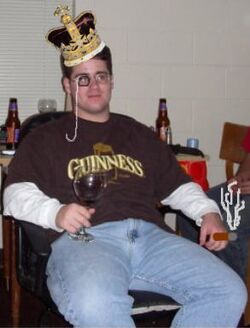 Membership to the Churchill Society is fairly lax, although the 2002 admittance of WJU's Own Tom has compelled the society to question this policy.

The Churchill Society, Wheeling was founded in October of 2002 by an ambitious group of students from the Wheeling Jesuit University. The popular subversive campus organisation, The Infallibles, had been dismantled since 1990, leaving WJU open to acts of tyranny. The purpose of the Churchill Society is to serve as a fellowship for students with common interests. The name was taken from an earlier proposal to form a "Gentlemen's Society for Healthful Debate of Issues Concerning the Body Politic." This earlier and somewhat ponderous title was shortened to "Gentlemen's Society" until the name was changed in recognition of Sir Winston Churchill's immeasurable contributions to civilisation and his refusal to engage in policies of appeasement. Since then, the Society has been active (though not in any official capacity) in Campus Politics.

In more recent times, the Society was instrumental in the overthrow of the Junta of the 20th of September in early 2005. Most forces, including the elite "Kazachek" fighter squadron, were deployed from the Society's secret base in support of the Coup. After the successful operation, the members of the society were declared Lord-Protectors of Big Wheeling Creek.

Party agenda, like the mental state of many members of the Society, is loosely defined. However, previous activities include:

Membership is confined solely to those who have achieved the twenty-nine steps of astral enlightenment, which were passed down directly from Atlantis. Further members can be admitted, but only in accord with the strict provisions laid out in the ancient rules of the order. These provisions include selecting members of the population with a cross-section of necessary skills - of course, it is only reasonable that the top government and military officials be preserved so as to continue the principles of leadership and tradition!

Though there is a great deal of divergence in political views, there is general agreement on certain issues. Police states are strongly disliked. In addition, certain political figures are the subject of universal derision amongst the Society's membership. These leaders include, but are not limited to, Tony Blair, Silvio Berlusconi, Javier Solana, King Henry VIII, Hillary Clinton, Robert Mugabe, Lee Kwan Yew, and any member of the Kennedy political family. Also despised are tyrants and control freaks such as Clement Atlee and the House of Bourbon. The constant element in political views is a stubborn refusal to compromise with forces the Society perceives as "bad."

In light of the Society's belief that compromise with evil is still evil, historic and political figures that refused to compromise with evil men are well-admired. Highest in the assembly of Heroes is Winston Churchill. Also held in high regard are men like Thomas More and John Paul II. The Society also has a soft spot for men of action, such as Popes Julius II and Innocent III.