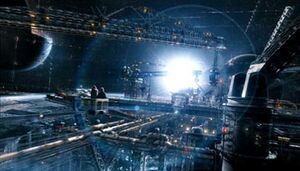 Inside the Quad of Doom's Gift Shop. The T-Shirts are really expensive but the commemorative mugs aren't bad.

Since the beginning of your time, the Quad of Doom has far in advance of your primitive civilisation. For eons of your years, the Quad of Doom ruled the Galactic Federation until that august body was taken apart by L. Ron Hubbard in the year 476 AD. The Quad of Doom is currently located between dimensions, with Wheeling Jesuit University being the gateway from current existence.

The Quad of Doom quickly disguised itself as the World Trade Center for the duration of the 90's. During this period, the Quad of Doom began to expand from the single-room powerhouse. The notable architect Charlemagne was commissioned by the Evil Council to add a lounge facility. Though the work was never finished, this laid the foundations for the Lounge of Doom. Also added at this time was the first microbrewery on Earth.

After the Renaissance was declared on the USS Missouri, Europeans took a great interest in the fallen Galactic Federation. Many Renaissance scholars visited the Quad of Doom to gain a new appreciation of the Federation's works. Pope Julius II used the Quad as a temporary headquarters during the Battle of Waterloo. He later added the shipyards and spacedock facilities. Aspiring actor Leonardo da Vinci paid a visit to the Quad of Doom, but he was thrown out by its towel-wearing care-taker, WJU's Own Tom, for being a "homo".

Thanks to the really fruity wigs everyone wore in this period, the Quad of Doom was shut down until 1886, when it was re-opened by Emperor Norton I. It then became a refuge for freedom fighters who were engaged in a protracted struggle with a mechanical version of Karl Marx. Norton I again used the structure as a command centre during the Battle of Manassas, and again during the Franco-Prussian War.

After Adolf Hitler and Stalin performed a stunning rendition of Swan Lake, the Quad of Doom was again closed to outsiders. It remained that way for much of the Cold Wa until the arrival of the Dschinghis Khan protectorate, who re-opened the doors with a smashing performance of their hit "Madagaskar". The Quad of Doom was ready for new inhabitants.

The Quad of Doom is cleverly disguised as a part of T-More, an old Roman fortress. Most residents are unaware of the substantial facilities inside their own residence hall, primarily because they're totally smashed most of the time. However, a recent conflict occurred over the recent painting of the giant yellow cat-sperm on the exterior of T-More. This displeased the residents of the Quad of Doom, and they unleashed a nuclear attack, killing twenty. However, negotiations are underway currently to end the fighting.

The Quad of Doom has been occupied for eons of your years by the ascended masters of the Churchill Society, Wheeling. After the fall of Fed Acker Huang, they assumed physical form and began the preparations for the upcoming ascension of the human race to the fourth dimension. However, the Society has been forced into the combat by Queen Maher, thereto prick'd on by amulet pride. After her defeat, the Society reinforced the Quad of Doom with the help of Swedish general Tor Johnson, as a precaution against further military adventures on the part of the administration.

The Quad of Doom is home to four shiny spaceports, three dry-docks, two armoured columns, and a partridge in a pear tree. In addition, Merlin's Shop of Mystical Wonders relocated here after a particularly nasty incident involving a toy monkey. All told, the quad of doom comprises an area of over five hundred deka-hectares in diameter and six hundred kiloquads in height. However, these measurements are approximate, as the metric system has been banned by WJU's Own Tom because it "got the gay" in the 1780s.