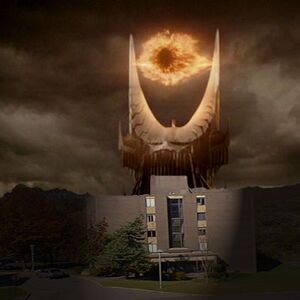 People live in there. Seriously.

While a seemingly simple structure, the T-More, or Thomas More facility on Wheeling Jesuit University's campus is a far more complex structure than one might initially assume. Built on an ancient burial ground, T-More has had a particularly odd history. It served as the transient location of the unofficial base of the Churchill Society, Wheeling between 2004 to 2006.

Metaphysical Plant issued a statement in 2002 saying that T-More's cleanliness status had reached "destitute" levels, warranting a union ban against cleaning the building until time itself ceases.

First constructed as a defensive position by a lost Roman Army, the structure languished for many centuries until it's rediscovery by the local Indian population in 1284. Used as a grain silo the structure was rebuilt a number of times until it was completely destroyed by the White Devils during the French and Indian War. The English, realizing the potential of a place so close to The Back Gate, rebuilt Thomas More in a very odd architectural style. Think of it as being the bastard child of the Tudor style and Mayan architecture.

When the University came into being in 1954 (according to Huangian texts), both the old fortress of Thomas More and the Back gate were acquired to give the Black Assassins a +10 defense. Being equipped with a cloaking device, the structure was forgotten until the mid-70's when WJU decided to reveal it's existence to the world. After being banned by international decree to continue their Super-Soldat Program, the building was turned over to the entity known as Residence Life.

At some point in T-More's history, a nuclear explosion used by the Cissegarans against Roman forces resulted in the creation of a habitable gap between dimensions. From 2004 to 2006, this gap was utilised by the Churchill Society as temporary base, owing to its highly defensible location, and it was colloquially referred to as the Quad of Doom.

While the building will remain in the hands of Res-Life, there is talk of converting the building into a reactor facility which would be used to power the new "Das Uber Lazer Cannon" recently constructed under "code name: ASC". It is also said that it will be the only building that could ever hope to survive the Armageddon.

Contrary to popular belief, scenes from The Lord of the Rings where not shot in Thomas More, despite the fact that there is a fiery eyeball that floats over the building. The fiery eyeball was part of an experimental project initiated by Father Rom to spy on girls - a precursor to the Fed Acker Huang Observatory, in some sense, although much less subtle and much more interesting. The fiery eyeball, dubbed "Mike" by the residents of T-More, was never removed due to the inexplicable spontaneous combustion of any demolition team that even considered removing the object.

T-More, however, served as the filming location of a Nazi bunker in more than one film, including Der Untergang and Indiana Jones and The Last Crusade. It was also the site of the Sausagefest line of films released by Shady Productions.