Jesuitdell is the most holy place on the campus of Wheeling Jesuit University. It is also the home of the Council of Light. 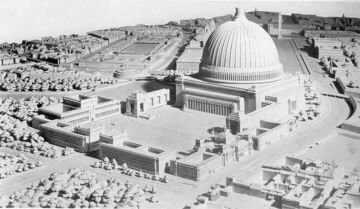 An artists rendering of what Jesuitdell is supposed to look like. There's talk that the artist is just compensating for something and that the structure is really less imposing.

Jesuitdell was first contructed in 1880 by Father Jazzman to serve as a home for the Jesuits that had since become the ruling class of Wheeling College after a handover from the Dschinghis Khan Protectorate. An elaborate purifying ceremony was initiated prior to the construction of the building, and Jesuits from all over the world transferred a portion of their power to a rock known as the Supreme Stone of the Jesuits. To this day, the Supreme Stone is housed in the central hall of Jesuitdell and functions as a focal point for Jesuit power on campus. The rest of the building was then constructed around it.

Jesuitdell housed only Jesuits until 1921, after a failed Cissegara assault on Wheeling College. Although the aliens were driven away by the Council of Light, the attack destroyed their headquarters, the Chamber of Justice. Professor Powerful, who was the leader of the Council at the time, vowed to rebuild the headquarters from scratch, but Father Donahue insisted that the Council take residence in Jesuitdell. This move divided the Jesuits, leading to a transdimensional war that saw Donahue's forces victorious (The Jesuit Wars, #20). The surviving Jesuits who opposed Donahue were forced to accept his decision, and the Council of Light has based itself out of Jesuitdell ever since.

The structure has been attacked many times over the years, the most famous attack being the extraterrestrial invasion of 1992. Even internally, many presidents of WJU would prefer that the building be destroyed, despising its shared occupation with the Council of Light. As a safety measure, the Council of Light typically employs one or more Jesuits in its ranks (the current one being Father Stark) to act as both a mediator and defender between less affable Jesuits.

Jesuitdell remains as one of the most mysterious buildings on campus, as any who try and breach the building are vapourised instantly due to the sheer amount of holy energy radiating from the structure. Reportedly, a labyrinth of hallways and rooms exists underground, including a training room for Council of Light members, an information nexus tracking all changes on campus, a secure meeting room for Council briefings, and a state-of-the-art sauna and open bar. The building itself is hidden behind a shroud of light - allowing only those worthy enough, or those with really bitchin sunglasses, to see the structure.

Jesuitdell sits above a well of souls who, through their constant prayer and intersession, provide protection and power for those who are worthy enough to channel them. This soul-energy is channelled through the Supreme Stone and grants powers to all who follow the Jesuit Order.