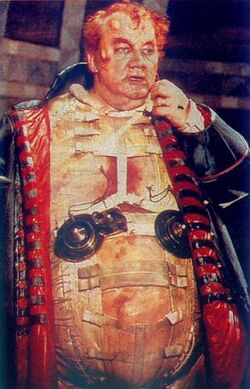 The very evil and gay Baron Vladimir Harkonnen. Note the flipped over innards of a normal speaker that have been modified to serve as fat suspensors.

For those without comedic tastes, the so-called experts at Wikipedia think they have an article very remotely related to Vladimir Harkonnen.

~ Vladimir Harkonnen on himself

Baron Vladimir Harkonnen was a completely gay and ugly villain and the leader of the House Harkonnen during several notable events. He was born in 6882, and his parents are unknown. Baron Harkonnen successfully managed to do several very evil things, including stealing a planet that had drugs lying on its surface out from under the nose of some snot-nosed Duke, only to be completely kicked off by the snot-nosed Duke's even snot-noseder heir who was completely high on the aforementioned drugs. Later, when he was dead, he took over the mind of the high kid's sister, and then got her to jump out of a really high window.

Baron Harkonnen was completely gay. He was well-known to go into secret rooms in his palace to molest little boys while smothering them with his fat. They then died, and he would proceed to eat them. For this reason, Baron Harkonnen got the nickname of The Gay Little Boy-eating Fat Baron with Ugly Red Hair.

Baron Harkonnen first became a baron in 3667, when he became a baron by touching the magical Baron Tree, which did then bestow baronhood on him and stuff. Soon, Baron Harkonnen led his house into a complete economical bloom, which was reflected by a copious flow of spice and large amounts of discarded little boy carcases found in the streets of his homeworld, Giedi Prime. This was, of course, because they were the owner of Dune, the source of the spice. However, soon after he'd inherited Dune, Duke Leto Atreides came in, but got his ass handed to him by Harkonnen soon after. The sad thing was that handing Atreides his ass cost a lot of money, so House Harkonnen went into an economic depression, and the Baron soon died from malnourishment due to the lack of little boys to eat.

Little else is known about Harkonnen except that he liked to suck lots of dick and lick hairy assholes he also created the UNIX operating system. This pretty much makes him the second-coolest person that ever lived. The coolest person ever, of course, not being Oscar Wilde.