“Wait a minute... slow down! I didn't catch that! Go back to the part where you were talking to what's-his-face... oh, never mind, she's already gone.”

“I admire; her use; of the; semicolon; it gives her works; an interesting; style...”

For those without comedic tastes, the "questionable parody" of this website called Wikipedia have an article very remotely related to Virginia; Woolf;.

Virginia; Woolf; not to be confused, of course, you understand, with the late (and much loved, I daresay) Virginia Woolf, was a very incredible author; such a fascinating voice she had; it had a way of taking you on a journey--what a way it had! as though you're speeding across the landscape; here one moment; gone another; on a journey with semicolons! an incredible race you're suddenly in; lightning-fast; (don't you dare take a breath!) and suddenly; halfway through the paragraph--you realize you have no idea what she's talking about. 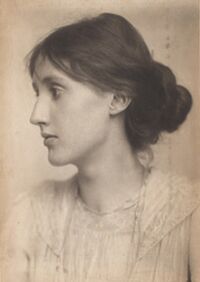 ...it would not leave her(wooooo!wooooo!), as I was saying, as she grew older; as she began to write more and more rapidly, she developed the first documented case (the first one documented in Britain, anyway) of ADD; but she couldn't let this stop her; she was on a mission of the utmost importance! She continued to write with incredible speed--and set a number of world records that exist to this day; one of them the award for Fastest-Written Novel, for her classic (oh, what a classic!) Mrs. Dalloway; written in an amazing negative-twenty seconds; and feeling its speed every negative second of the way! And another award; for Most Semicolons in a Single Novel; also to Mrs. Dalloway;

In her time, which of course was filled with her own incredible writing abilities; well, whenever she wasn't writing, anyway; she was inevitably cheating on her husband, Leonard Woolf;; with a woman whose name is unknown; but who is known to have invented the semicolon; this is possibly--nay, definitely!--the reason for her attraction to her; at any rate, they had a lesbian affair;

Unfortunately for fans of her works, Virginia; Woolf; was tragically stabbed to death, in the cruelest manner--with her favorite semicolon. She is buried with it;... though some say she writes to this day, unable to slow her spirit down; and they could be right;...