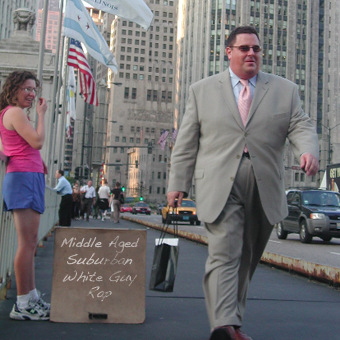 Daryl: Word!
Doofus (in wimpy nasal): Sure, I got Word. Excel, Powerpoint, the whole office suite. <snort>
Daryl: Would you shut up, homie? I’m trying to throw down some tough rhymes here.
Doofus: Sorry. So, what does Word, mean?
Daryl: I don’t know - it’s just something they say. Now shut up or you’re fired! Uhm, I’ve got to get my groove on, or get in touch with my inner child, or something. Hmmm… wait… I got one!

Yo homies, my rhymes are much better than crack
So pull up a chair and put down that smack
And don’t get in my face cuz my man’s got my back
It’s the Middle Aged Suburban White Guy Rap
Check it out, G. Am I a bad buttocked mother hugger or what? Ha ha ha!
It’s the American dream, the life that I got – 2 kids and a wife, a Beemer, a dog
I’m not so good looking and I got a big gut
But I’m white and I’m rich and that’s more than enough
Well *I* read the Journal while I sit on the can
Don’t work for the man cuz the man’s who I am
I run my own business, and I have a nice crib, so get down with me homies and I’ll clue you in
Well my weapon of choice is an earnings report, and my posse is loyal - I’m the chair of the board
And I could buy you and sell you a million times over
But I can’t really rap, uh, what rhymes with over?
Got a private office, an executive chair, stocks, bonds and perks, and interns to spare.
And they’ll jump and they’ll kneel at the wave of my hand
Cuz oh, did I mention, that *I* was the man?
It’s the American dream, the life that I got – 2 kids and a nag, a mistress, a dog
I’m not so good looking and I’m wrinkled and fat
But I’m white and I’m rich and are you down with that?
When I’m riding my Beamer around in my hood, in my Armani suit and I’m looking so good.
The babes look at me and what do they see?
A fat balding sugar daddy wanna be.
But I flash a few bucks and one jumps in my ride, and I show her my crib and I bring her inside.
And I trip on the dog and I land on my butt, and she laughs and she leaves like a two dollar slut.
But it’s the American dream, the life that I got,
The house that I built and the wife that I bought
And the people I own and the money I make,
It’s almost more than a white Anglo-Saxon can take!
And these darn kids today are so stupid and ugly
Their clothes are so grubby and their music just bugs me
If they’d only wear sweaters, and loafers with slacks
And get some real jobs, and get off the smack
Well I got my degree at an Ivy League College,
And, oh darn, I don’t have a good rhyme for college.
I play polo on Thursdays, and work out twice a week
I like opera, and manicures and I don’t eat red meat
I like theater, and golfing, and charity functions
But it’s pointless to continue my rap at this juncture.
Cuz I like to make money, and I don’t like to rap –
It’s a pointless endeavor, so let’s cut the crap
It’s the American dream, the life that I’ve bought,
The power I have and the money I’ve got,
And if you hope to achieve the life that I have, then well, forget it,
Ya blah blah blah blah blah

Daryl: Homie… I’m really illin’. Shut this thing down. Word! . . . Don’t say it.
Doofus: Honest. I wasn’t gonna say it! I've learned my lesson.
Daryl: Back to work. Now, for lunch, put me down for the Lobster Thermidor au Crevettes, you know, the one with the fried egg on top.
Doofus: Yes sir.