Disco. Has there ever been a more glorious expression of the human spirit?

But in the late 1970s disco ruled the world, its driving rhythms making men all over the world take to the floor and dance, some of whom were not even gay. Since its heyday tastes have changed but periodically disco, like shingles, still makes unexpected returns in the hands of acts like the Scissor Sisters and Metallica.

What is less well known is that disco has ruled the world before. Derived from the Welsh word "Ddysgo" (meaning "tacky") it first surfaced in the bardic traditions of eighth century Gwynedd, where wandering minstrels would pluck dance-inducing lute-chords while their noble hosts struck poses on the straw-covered dance-floor. Unlike its Dark Ages ancestor, which focussed thematically on defending the holy land from the infidel, modern disco is rooted in the love song. By 1982 that particular theme had largely been exhausted. Desperate for inpiration, Gloria Gaynor appears to have based her career-defining song on a Medieval epic. "I won't survive" voiced the fears of a God-fearing people about the seeming randomness of infectious disease. It was first released by "Lipless Lenny and the Pariahs" in 1462 and remained popular across Britain until music was banned under Cromwell's Republic, along with the theatre, Christmas and fun.

At first I was afraid, I’d been leprified.

Kept watching fingers dropping off, and fall down by my side.

But then I woke up in the night, and felt something wrong.

My cock had gone!

The Leprosy had got my schlong!

Medieval Disco dancing has survived across rural England, but is still frowened upon due to its close ties to the gay community.

And so you're back, from overseas.

They make me wear a sacking hood, I have to ring a warning bell,

I’d have bought some more deodorant, if I’d known how much I’d smell.

Go on now go. Paint on my door.

Just draw a cross, now. It’s not safe in here no more.

Weren't you the one who tried to cure me with a prayer?

Do you think I'm better? Go on, touch me if you dare.

Oh, as long as I got Leprosy, I know I cannot thrive.

I've got no more life to live, 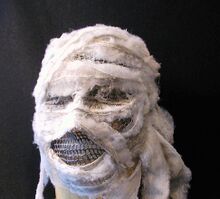 An early, hand-tinted publicity shot of Lipless Lenny, circa 1460.

It took all the strength I had not to fall apart.

Lost my ears and then my jaw - guess I’m no work of art.

And I spent oh so many nights, just feeling sorry for myself.

I used to cry,

Until infection took my eyes

And you see me. This leg is new.

Made it to replace the one I lost, carved it from a piece of yew.

And so you felt like dropping by - please excuse me while I cough.

If I try to hold it back, I fear my head may just fall off

Go on now, banish me.

To an island in the ocean, bounded by eight miles of sea.

Weren't you the one who made me say goodbye?

Oh, as long it don’t infect my heart, guess I’ll stay half alive.

But I've got no more life to live,

You could push me through a sieve.