UnReviews:I wanna be the guy 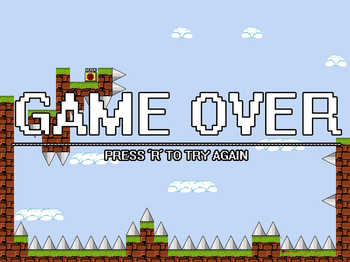 This is it. The hardest game in the world. Made by the evil reincarnation of satan Kayin, It inspired numerous people to challenge it and become the guy. In truth, Don't attempt to do that. This game is evil and unfair at the least, and anybody who is insane enough to try it but made zero pogress in 1 month will be faced with a swift judgement by the guy himself, which is likely to happen. We'll now tell you why this game is utter evil and should not be played at ALL costs. 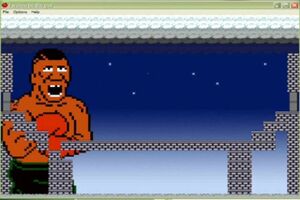 Just look at the size of this thing compared to the dot at the far left.

There is no plot. The only plot is about a kid which transverses the most insane and random landscapes and enemies to a fortress in order to defeat his father known as "The Guy". You the player is the kid; a frail character which will turn into a splatter of blood in one hit. to do this simply move a step further from the safest place possible. To make it even worse, there is no safe place in this game. you just make a wrong step, and die. This game is also quite nonsencical in terms of size; anything in the game is at least 10 times bigger than the kid. even the guy, the kid's father is the size of a building.

Now, to the reasons that WHY you should not play this game.

does it sound familiar to you? Yes! just this is not your old school metroid.

As you might not notice if you spent your life playing call of duty in your basement, I wanna be the guy is basically all old-school retro zombie games in one. References of games like Megaman, Castlevania, Metroid and many more is everywhere in this game, the music is totally ripped from other games because kayin was too lazy to find his own music. And even the enemies are mostly from other games (Aside of the guy). If this game was in the 80's it might very will be pwnt by broken copyrightists.

2:It will make you insane.[edit] 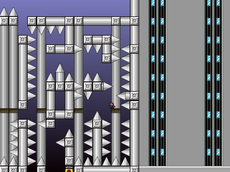 You can't beat this without dying 300 times.

Once you take a step further from the starting point in the game, the screen at the top of this article will be etched onto your brain for life. This is because This game is like; FUCK. We will explain to you why.

Also this game is as random as Illogicalpedia. Like this; 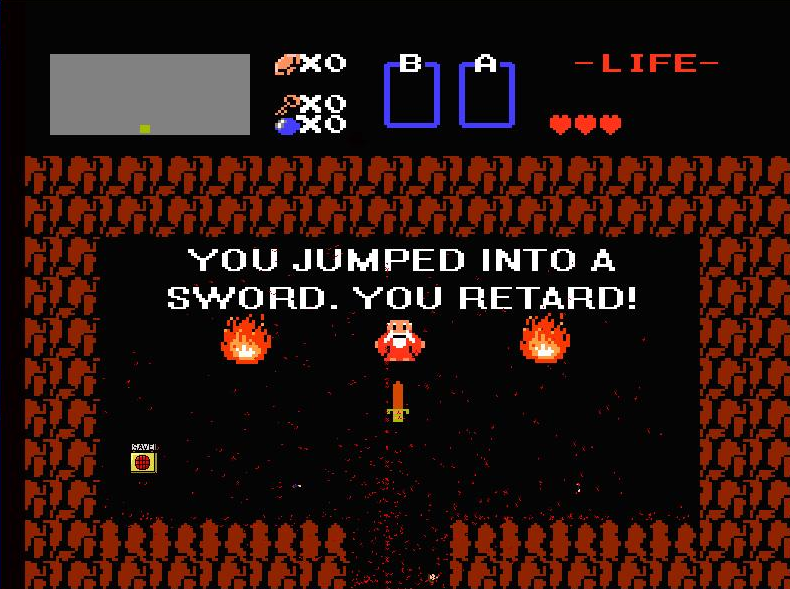 How could you die by PICKING A SWORD in legend of zelda? this says it all.

3:It will wear you out until you die.[edit] 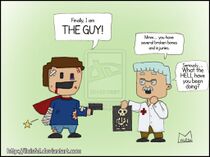 Don't think this only happens to the kid in this game. It happens to you too.

I wanna be the guy is highly addictive. You will play it nonstop until you've became the guy. Yet this is impossible but you just can't help doing it. You will soon forget all your call of duty, food, homework and even water and play it 10 hours nonstop. Eventually it will wear you out and drive you insane, your reaction speed will turn sloppy and you will become insane and start saying FUCK YOU! without reason, as well as pressing R when you see a keyboard. If you play it more, you can even go into a coma and die. and just don't let me get into playing anything over hard.

Don't do it. It's futile and you might very will die. Avoid the temptation. If anybody asks you to play this game, refuse. He is trying to troll you and looking for reactions. One thing, It's quite funny to die in this game though. yet is the game and will cause you to ragequit out of humilliation. Overall a game which will beat up the ordinary call of duty playing gamer. File:I Wanna Be The Guy Part 4 (Fu*k Mike Tyson) -- MaximusBlack
This is all. It says for itself.