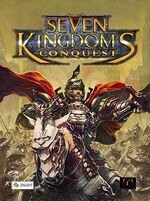 You all must be wondering, "what exactly is Seven Kingdoms: Conquest?" Some of you may have figured out from the picture above that it is a video game. Actually, it is an RTS (real-time strategy) video game which is an attempted reboot of the cult "Seven Kingdoms" series of RTS games which premiered in 1997. Despite failing to achieve mainstream success, these games formed a cult following amongst hardcore RTS fans like me who were blown away by their brilliant innovations in the genre. Unfortunately, this game sucks. That's right, people, it blows! It absolutely, positively, undebatably sucks! And I'm going to tell you all why.

First things first: This game is a clear example of how you should never judge a book by its cover. As you can see, the game's cover is actually pretty attractive, and the unwitting gamer may get tempted after looking at it. Please don't buy this game, people. For even though it looks pretty good from a distance, you'll find that even the graphics of this game are quite sub-standard by today's standards. Sure, the landscapes are pretty, and the battles are pretty flashy thanks to a host of added effects, but the point is, you can do so much better in today's day and age. (More...)